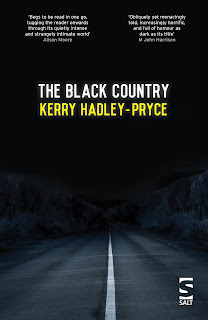 The "Black Country" is an area of the English West Midlands which was central to the birth of the Industrial Revolution - it was so called due to the smoke and dirt from numerous factory chimneys.

In Hadley-Pryce's debut novel, there is a different darkness, less easily cleaned up, and the book is a journey into its heart.  It's like a nest of Russian dolls in reverse - rather than each opening to reveal a new, bright and smaller copy of itself, it is swallowed up by a darker, more horrific spectre.

The story is told in a very distinct style: ostensibly about Maddie and Harry, it's indirect, telling us what they thought, what they said they did, what they would have done. At first folksy, like a neighbour gossiping over the fence, the atmosphere becomes increasingly sinister. Nothing is certain, the story is conjecture, comparing Harry's and Maddie's accounts of the same events, dodging back and forward in time and making links in words and actions (and even smells - the book is laden with smells).  We don't know who is narrating: there's an element of judgement in it, we feel, especially when it comes to Harry, perhaps. Or perhaps not. We will make up our minds. We will learn what Harry's like.

Set in the cold of winter, in the Black Country, the book opens in the midst of a crisis in Harry and Maddie's life (I was going to say marriage, but then realised that i'm not actually sure if they are). This is rooted in an evening spent at the local hotel, celebrating the life of their old University tutor. What seems like a bit of marital discord is soon revealed to come from a much darker place. Neither of the pair is innocent. Sullenly, they bicker and try to shift the blame. What happened was bad, but what's revealed in the intricate dance between them afterwards is worse, much worse. Hadley-Pryce's writing and her handling of her subject are simply masterful here - she plays with our sympathies, holding up the pair in various different guises: the downtrodden, ineffective teacher, the desperate husband, the frustrated wife - while gradually stripping both Harry and Maddie of dignity and revealing their nasty secrets. The dry, judicial tone gradually, oh so gradually, becomes disturbing in itself: who is telling this story? An omniscient narrator? An inquisitor or some sort, we might think but with what agenda?

I found the first half of the story the most effective, the weekend in which Harry and Maddie seem almost trapped in a bubble of their own, going through horrific events but with almost no contact with anyone else. They seem like ghosts in the wintry landscape, locked in their own horror, or perhaps figures in a  painting by Edward Hopper. The events of the second half, while revelatory, begin to involve others - a policemen, a nurse, a schoolgirl - and lose some of the sense of gnawing loneness. On the other hand, those revelations strip Harry and Maddie to the bone.

This was a compelling read, but - and this is means as praise not criticism - it's a nasty book in which people do nasty things (and I'm not sure we see the half of it, there hints at plenty more below the surface). One leaves it feeling a need to wash. There is no redemption here, no escape, no happy ending. As Maddie remarks several times, she is living in Hell and indeed, while resolutely naturalistic with no trace of fantasy or the supernatural, this is in essence a horror story where everyone is the Devil.

Except for Faith, of course. Poor Faith.

Highly recommended, and I'm eager to see what Hadley-Pryce writes next.