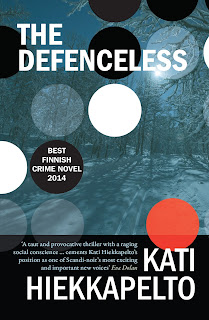 
I'm grateful to Orenda books for sending me a copy of this book. I found this an intriguing read, one of those rare crime books that gives equal weight to a twisty, credible plot and to well drawn characters who are themselves caught up in a believable moral drama.

Anna Feketa is a detective in Finland at the centre of a complex investigation involving asylum seekers, drug trafficking, gang violence and - at the start - the unexplained death of an old man on a frozen road in the dead of winter.


These issues, particularly the theme of strangers in a strange land, are apt for her to be looking into because she is herself a foreigner - originally from the Hungarian part of Serbia.  Anna simply has no home country left.  The land she grew up in no longer exists, and while she has built a life for herself as part of the Finnish police she still feels herself a stranger there. This isn't helped by the (at times rather crude) racist language and attitudes of her sidekick, the grizzled cop Esko. He has accepted Anna (this is the second in a series and I think that the first book describes how that happened. The case that the two of them are drawn into now concerns a young Pakistani boy, Sammy, who had fled for his life, become addicted to drugs and ended up sleeping rough in the snow. Of course Esko sees him as a scrounger and criminal who should be sent back where he came from. Anna though feels sympathy for Sammy and tries to


help him, but the situation is tricky: he has become involved in crime and Esko doesn't trust him one bit.

Anna faces a risk of getting in too deep emotionally - she also wants to help Gabriella, the Hungarian au pair arrested in connection with the death of that old man on the road. At a time when her family are distant and things changing at home, is she looking for something to hold on to - or are her instincts abut the two suspects correct?


At the same time, Esko wants to prove he is still in the game by facing down a dangerous and growing new gang, the Black Cobras, and keeping them out of Finland. His quest could bring more concrete dangers to them all.  Yet the relationship between the mismatched two - clearly lonely - people who are in many ways opposites and unlikely friends is touchingly, even tenderly drawn

As I write this the headlines are full of the plight of Syrian refugees making their trek across Europe to safety, and I can't but feel that the publication of this book is very timely.

As a portrait of a (literally) cold new world, yet lightened by a degree of kindness and empathy, this would be hard to beat. It is a book with great heart, and I look forward to reading more about Anna Feketa in future. 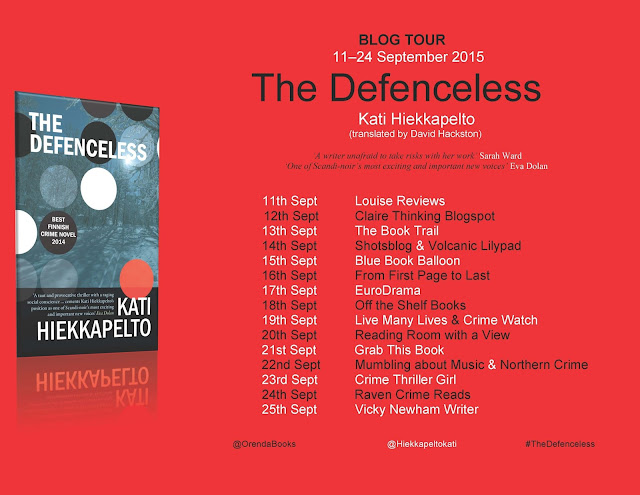