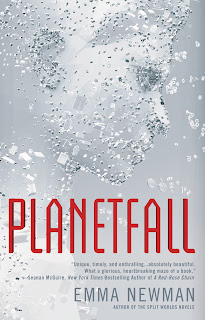 I'm very grateful to the author for an advance copy of this book.

I apologise in advance if this review comes over as gushy, but I was quite simply blown away by this book.  I greatly enjoyed Newman's well observed, magic-with-manners Split Worlds series, and I hope there will be more of them, but in my view, with this book, she simply takes her writing to a new level: indeed, several new levels.

Renata Ghali - Ren - is part of a human settler group on a distant planet.  It is 20 odd years since they arrived (the "Planetfall" of the title) and the group has hunkered down and established a colony on this distinctly Earth-like world (the day length and gravity are nearly the same, and once they developed vaccines against the indigenous microbes, the group were even able to breathe the air). They live in domes, recycle pretty much everything (human waste goes into each dome's compost system, other stuff down pipes to be digested and turned back into feedstock for the 3D printers that make almost everything needed) and have built a harmonious and even idyllic little community.

And they watch for the return of their prophet from God's City.

Because the purpose of this one-way trip wasn't primarily scientific curiosity, or colonisation. Back on Earth - where, the book hints, things have got rather nasty, though we never get many details - Lee Suh-Mi received a vision, which revealed both the location of the planet and how to reach it. She gathered a group of pioneers (most of them psychologically screened) and leaving family, friends and careers behind, they travelled to their new world... where Suh-Mi disappeared into the strange, living City.  Now there are two members of the colony on guard over the entrance at all times, waiting to welcome her back. Periodically, the City has dramatic revelations for them, supporting their faith and hope. It is a community of believers.

The dichotomy between the sophisticated science that keeps the colony alive - recycling waste, 3D printing everything needed from food to clothes to buildings, monitoring the health of every member via chips embedded in their heads (which also allow them to communicate with each other in a kind of human Internet) - and this conscious, even ecstatic, vein of religion gives the book an immediate tension, a tension that crackles from every page.

Ren herself brings another sort of tension. The colony's 3D printer engineer, she was Suh-Mi's oldest friend, and mourns her absence. But Ren seems to have secrets, and as we go deeper into the story it's clear that loss has affected her deeply. The whole book is seen from Ren's viewpoint, and it would spoil the story to say much about her secrets: I will only note that Newman does a brilliant job at gradually - oh so gradually - revealing both what her problems are and what caused them. Along the way we learn about Ren's relationships with her parents and her daughter, none of whom she will see again. There are passages here which have an almost haunting intensity, for example Ren remembering sitting beside a hospital bed in which a loved one lay dying.

But this isn't only a story about Ren, although she is the heart and centre of the book. This is also the story of Sung-Soo, a stranger who walks out of the wilderness and sets events in motion. It seems that the colonists weren't as alone as they thought. Sung-Soo has an affinity with Ren, and wants to spend time with her and even help her, but his naive enthusiasm seems calculated to upset her carefully maintained balance and risk exposing those secrets. And it is also a mystery story - the mystery being, what really brought the colonists to their new world, and what is supposed to happen next? They have, it seems, been stuck for decades, moving neither forwards or backwards. There are questions that nobody will ask, answers, perhaps, that no-one wants to hear.

If the colony as a whole is stuck, so is Ren herself. Newman gives us a very human, very fragile yet also steely hero. You can't help but sympathise with Ren, but at times she - or perhaps, her situation, which she won't face - can be irritating. You cheer her on, while wishing she would, actually, move on. That's very much the reaction of Sung-Soo. As an outsider coming he in from the wilderness he put me in mind rather of the Savage in Brave New World, a proxy for the reader showing up the absurdities of the colony. But Ren has her feelings and experiences and instincts, and they are valid, and she insists that they are respected - didn't I say she was steely?

So - in the general and in the particular - there is frustration; the dilemma - I must do this thing, I fear to do it - with its resulting moral trauma is played out to the end.  The resulting emotional see-saw between Ren and Sung-Soo is yet another source - or effect - of the tension at the heart of this story.

Brilliantly written, haunting in places, with a constant narrative drive, this is the best science fiction I've read for a long time. Above all, Ren is a magnificent and magnificently written character who Newman does an excellent job of making real. When I arrived at my Tube station with 20 odd pages of this book left, I simply had to stand there on the platform, let myself be late, for work and finish it.

I think you'd want to do the same.