What I Did In My Holidays

Well, it looks like Summer's just about over - Son got his GCSEs the other week, our few days being rained on in Dorset have come to an end and it's a rainy Bank Holiday Monday. I start back at the Circumlocution Office tomorrow (boo!) so I thought I'd look back to sunnier days in July when I took a week off and went digging.

I'd spotted that, fairly near us, there was an actual archaeological dig going on: at Dorchester-onThames aimed at understanding what happened there at the end of the Roman period. This is a period that interests me, and and they were encouraging local volunteers to join in so I bought myself a trowel and went all Time Team. 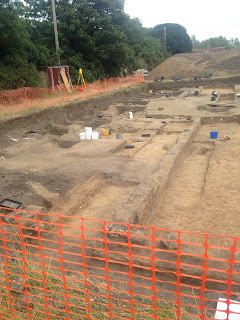 I've been interested in archaeology for ages, but done very little. When I was 15 or 16 I did a teeny bit at Norton Priory near where I grew up, but that's about all. And that was 30ish (very ish) years ago. So I was a little apprehensive. Bring waterproofs, they said, sunscreen, stout boots, gloves, a sunhat, a water bottle and - most importantly, of course - the trowel. So I collected all that and turned up at 8.30 on the Sunday morning. There was a very mixed collection of people on the dig - apart from the supervisors and the director and assistant director, the team included know-nothings like me, more skilled amateurs (of varying ages) who were doing extra-mural courses, and archaeology undergrads.

After a safety briefing - where to walk and not walk, avoiding dehydration (it was very hot and dusty), proper use of tools, precautions in the wet when the ramp into the trench would become slippery - we were assigned to different groups and allocated areas. Within an hour I was actually digging.
The picture on the right shows how the site looked while I was there. Our area was the left hand corner at the far end, just in front of the spoil heap. (When the wheelbarrow was full, it had to be run up out of the trench and tipped on top of that heap). North is to the left, as is modern Dorchester. The Roman road from Silchester to Alcester (near Bicester) crosses the far end of the site. 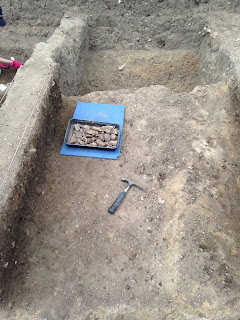 I was allocated an area to clear - the aim was to remove darker, post Roman material overlying a lighter, sandier level which was believed to be the top of the Roman levels. This is my area in progress (after a couple of days) with some of the darker material gone. You can see my finds tray, containing - mostly - bits of animal bone and pottery. Not having dug before, I was amazed by the quantity of this. At the top of the picture is a ditch, which was slowly being excavated by one member of the team a proper archaeology undergrad, who was working in more and more cramped conditions as he dug down - I hadn't appreciated the contortions required by archaeology: as it was it's taken several weeks for my knees to recover (I think they've recovered...) and I was working in fairly simple areas.

As I said above, it was very hot and dusty in the trench, so I was relieved when, mid-morning, the digging stopped for tea. I soon learned that archeaelogy works on tea: there were morning and afternoon breaks and tea was also supplied at lunchtime. 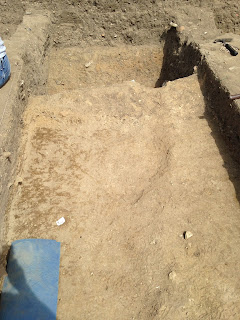 As well as digging, we were given lectures/ talks by the experts running the dig as well as others who came in specifically to talk to us: we heard about the Roman pottery of Oxfordshire, basic archaeological surveying, identifying bones, the sequence of sites in the Thames valley, the history of landscapes and about use of photography in archaeology. It's years since I attended any kind of non work-related lecture and I found all this simply fascinating.

What was also interesting was seeing the struggles that go on to identify the various layers and levels as you dig - with numbers attached to each and debates over whether this layer of greeny sand was the same as that, I was often left looking on in amazement as the supervisors settled an issue. Basically I was waiting to be told what to do: also actually quite nice when I spend the rest of my work life having to decide what the answer is (of course I make it up as I go along but don't tell anyone).

The picture above shows my bit a couple of days on and records a pause during one of those debates - the difference in levels was because the darker, later material had been deeper on the left and once removed it left a ridge which eventually had to be surveyed and mapped. I actually took the picture because I'd found a nail (you can see the white tag where it was) and was quite impressed with myself for that. (I was even more impressed that I'd managed not to prick myself on it: it was sharp end up - be warned!) 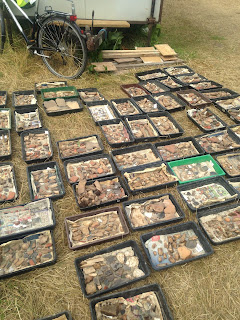 This picture shows most of one day's finds (and my bike) just so you can see the amounts of stuff that was there. This is pottery and bone, which was just collected up in trays - metal bits like coins and nails had their location recorded more accurately (hence the white labels).

It was an incredible week which I really enjoyed - meeting new people, learning stuff and being outdoors. While it got sweltering in the trench and was very dusty, we were carefully looked after and there were all those teabreaks.

Then on the last day we had torrential rain and, basically, the work stopped in mid morning. The site was too slippy, there was a danger of trampling things down, and pushing the barrows up the ramp became too risky. I was pretty pleased with myself though because, almost at the last moment, i found my final coin, right in that far corner - it seemed like an excellent and to a great week.
A few days later, and everything was covered over again, as you can see below. I hope, though, to be back next year, if they'll have me. 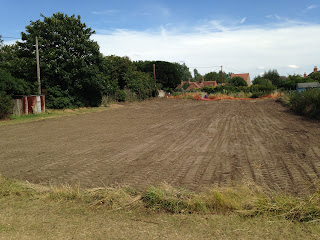