I'm grateful to the publisher for sending me a copy of this book to review as part of the Murder in Malmö blog tour - for details of which see below.

I was especially intrigued by the book as it seemed to me to represent a crossover - Scandi crime written by a "foreign" author.  Macleod was born in Edinburgh and brought up in Durham - although he notes that his family originated from the Isle of Skye, where his Viking ancestors settled "after one of their many raids.  Hence the name Torquil, which is Scandinavian."

So perhaps not that foreign - but still, how would it work? I think one of the big attractions of these books for the UK reader has been getting an insider's view of what we tend to regard as perhaps not idyllic, but well behaved, orderly, socially contended nations close at hand. And generally in a crime novel that insider's view will show up the side the Tourist Board doesn't want to dwell on, so the clash of viewpoints should bring an interesting tension.

It's one thing, though, to skewer your own country like this: another perhaps when writing about another. So I was also slightly anxious.

This is the second novel about Inspector Anita Sundström, following from Meet Me In Malmö and I should warm you immediately to read the earlier book first because while Murder in Malmö is self-contained - you don't need to read anything else to enjoy it - it does give away pretty much the entire plot of the other book including some surprised elements.  That's because it directly follows earlier events: Sundström appears here in the aftermath of some pretty traumatic stuff, she's on shaky ground with her detective team (one of whom in particular has been making trouble and profiting from the earlier events) and a character from Meet Me In Malmö appears with whom she has continuing dealings.

I thought that character development worked very well: with Sundström's self-belief and standning undermined, she has to work pretty hard to reestablish herself and it's not helped by the fact that her relations with her student son are strained, or by being given a "baby" policeman, Hakim, to oversee (and he's an immigrant to Sweden (as some would see it - having come from Iraq as a child he sees himself as a Swede). She is fearful of Westermark, a monstrous sexist and indeed the office sex pest (see how that picture of egalitarian, progressive Sweden crumbles?) and of her boss, Moberg who she needs to protect her from the fallout of events in the earlier book. So she's got little scope to go out on a limb when the simple art theft to which she's been assigned seems linked to the high-profile murder of a businessman the rest of the team are working on.

At the same time, a gunman begins to target Malmö's immigrant population.  As the body counts from the different crimes rise, and more paintings go missing, the team seem stretched to the limit - and will they, undermined by internal squabbles and recrimination, be able to put all the pieces together?

This is a fine mystery and a compelling read. MacLeod brings together the threads very deftly and the book concludes in a nail-biting chase which is done very well indeed.  Sundström herself is a great creation: pig-headed and far from likeable, and with personal problems (but NOT the cliched burned out detective) while very much the conscience of her squad.

And - to answer the question I raised above - Macleod really brings off the trick of writing a novel about another country that does delve into the dark side, without coming across as being critical or (even worse) gleeful that all isn't perfect.

Meet Me In Malmö but get this book at the same time: you'll want to read them together in short order. 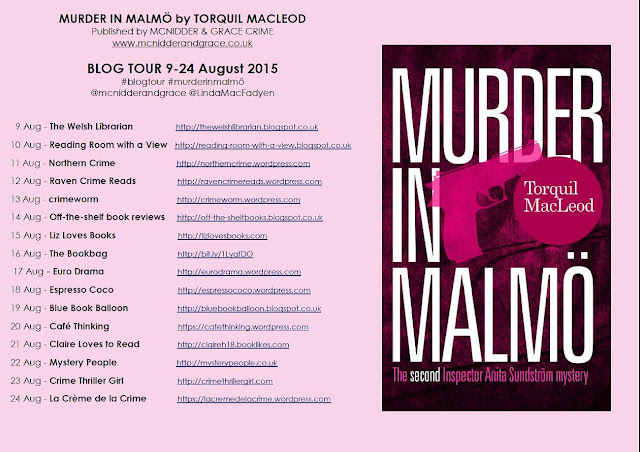