Review: The Settling Earth by Rebecca Burns, with Shelly Davies

I'm grateful to the publisher and author for letting me have an e-copy of this book via Netgalley.

Not far from where I work in London, at the Trafalgar Square end of Whitehall, is a plaque 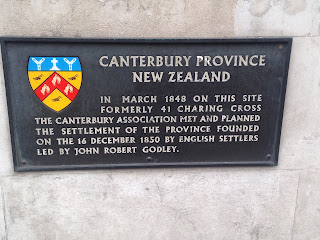 commemorating a meeting held in 1848 which led to the founding of Canterbury Province, New Zealand.  I've often been past and pictured the Victorian worthies - probably male worthies - gathered solemnly. Clearly somebody saw great significance in that event and ensured it  would be recorded on what is - for London - a fairly colourful and eye-catching monument.

But it doesn't tell you anything abut what happened next.

Billed as a collection of short stories, The Settling Earth is perhaps more of a story cycle, exploring the reality of settler life (and with some perspective from the original Maori people) through the lives of a number of, mostly, women. The stories are loosely linked, featuring many of the same characters and with later stories filling out aspects of the earlier ones. Burns is good, especially, at capturing the lives of her characters through telling details: a baby's rattle delivered in a parcel, a woman yearning for pickled eggs, a treasured memento brought on that three month voyage from Britain.

In the first story, A Pickled Egg, Sarah waits alone in her house on a remote farm for her husband to return from town. She's been getting forgetful lately. Perhaps it's the weather? In the next story, Mr William Sanderson Strikes for Home, we learn what the husband has been doing all the while in a "boarding house" and then in Miss Swainson's Girl, we meet one of the women who works in that house, to support her child, passed on to live with a stranger. There is a sense of desperation in Phoebe's life, with all the hopes and dreams of a new life on the other side of the world betrayed.  Later we will meet Miss Swainson and her son, in Port and Oranges.

With Dottie, the focus shifts to a woman doing "The Lord's Work" caring for orphans: but "it was harder to convince herself of the Lord's grace at night". This is a story full of guilt and self-deception, beautifully paced and with a shattering conclusion, introducing Mrs Ellis who, amidst ghastly events discovers "small moments of tenderness". Like most of the characters in these stories, she has her own sadness, a background hinted at but never stated as she walks among graves, reading inscriptions to a child, a husband.  "The tramping of Auckland's streets stretched the cord of remembrance. Small wooden crosses, resting silently under a dappled oak tree. A paced kitchen floor and an empty cradle."

Mrs Ellis is, seemingly, a widow: the main character in the next story, Dressed for the Funeral, is a newly married woman, married to an older man and regretting it: and she learns some home truths from an unlikely source before discovering a shattering piece of news and being faced with a choice.

The final two stories, Ink and Red Lace, The Beast and Balance, return to the farm where Sarah is waiting. Her husband returns accompanies by a Maori man, Haimona, but all is not well with the family of Hans, the farm manager. It's Haimona in the final story - written by Shelly Davies, a native New Zealander - who brings some perspective, some balance, to the whole cycle and it closes where it began.

These are wonderful stories, describing the lives of women coming to terms - in different ways - with a radical break to their previous lives. They are women who relive the desperate circumstances that led them to emigrate even as they face new problems and see the dream of a new life fade. They are all strong characters and one senses that the Victorian conventions which came with them on the emigrant ships won't last long in the New Zealand climate.