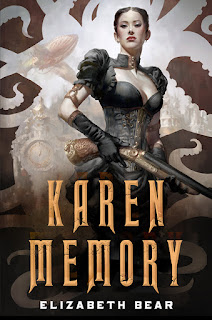 I bought my copy of this book.

Karen Memory is an enjoyable romp of a book.  Set in the mid 19th century, while it has steampunk pretensions - mind control gloves, airships, medical robots and steam-powered sewing machines - on which the plot depends, to a degree, it avoids the trap that so much steampunk falls into of glorifying that time.

There's plenty wrong with the Rapid City in which Karen (surname Memery in the book) finds herself  working in Madame Damnable's brothel, amidst the anarchy of a strike-it-rich gold rush in the US northwest. In particular, there's Peter Bantle and the ghastly cells in which he keeps women trafficked from India and China. Madame's establishment is far removed from these, even if the two serve the same appetites. The book doesn't shy from such realities, any more than it ignores the fact that Karen can't vote because she is a woman, or that the US Marshall Reeves is illiterate because he's a black ex-slave or that he and his postman, Native American Tamoatooah, need to tread carefully since those they are pursuing may be villains but also have the privilege of being white, male and "respectable".

Bear blends all this, and more, to create a seat-of-your-pants adventure full of scrapes, jeopardy and derring-do. The action barely lets up throughout the book. Karen's a confident hero, happy to take the fight to the villains when she needs to defend those she loves, especially Priya, one of Bantle's girls who has escaped a life in his "cribs", and reckless of the danger she places herself in.  But there is more to her than kick-assery and fighting spirit. We learn how she came to be at Madame's, and what she wants from life. Both aspects - her courage and her history - make her a deeply sympathetic protagonist, this was only slightly undermined for me by the dialect Bear employs which comes over a bit Tom Sawyer. (But then, a standard steampunk set in Victorian London cam come over a bit sub Sam Weller, so at least it's a change!)

A fun book, essentially steampunk-with-a-twist (and sensibly not going all out for the brass-goggles-and-corsets thing).  Definitely recommended.