#Review - The Hood by Lavie Tidhar 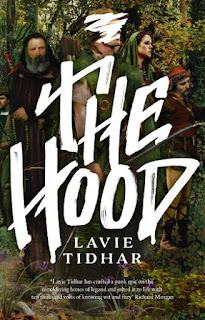 I'm grateful to the publisher for an advance e-copy of The Hood via NetGalley.

Following his iconoclastic take on the King Arthur mythology in By Force Alone, Lavie Tidhar has now turned to Robin Hood. The Hood is very much a sequel, despite being set six hundred(ish) years later - some of the same characters appear or are mentioned, possible because both books dip into the fae-tinged lore of the green and pleasant land. (Even if characters here repeatedly characterise all the Elves and magic as made-up nonsense - nonsense can still have power).

The book's also a sequel in a thematic sense, exploring some of the same themes - for example, how unaccountable power lurks behind the tapestry of history - and in a similar, picaresque style, across a horde of characters and merrily leapfrogging years or decades when needed.

We are in the second half of the 12th century and England is plunged in civil war. Or at least, nobles and princes are at war: a definite theme of The Hood is the lives going on around that, mostly ignoring the battles, escapes, marches and rivalries that are occasionally referred to as the struggle moves backwards and forwards. Instead, the book focusses on Nottingham and Sherwood (of course) though beginning in London where one Will Scarlett gets himself into a bit of bother.

That isn't, though, our entry point to the happy band of outlaws making free in the forest. Throughout this book there is a Hood in Sherwood, just as there are numerous "hoods" who form part of his crew. Tidhar plays happily with concepts and language to compare the outlaws to a gang of mobsters (fair, since that's really how they appear in the sources). Hood is even named Robin, or Rob, at times. But he's hardly a central figure in this story. Necessary, yes, like a king on a chessboard, but also weak. Marian is more important, as are the various figures who wheel around her - Birdie, the strange figure sheltering from the world in a monastery; Rebecca, the daughter of Jewish merchant Isaac of York, who herself becomes something of a gang boss in Nottingham, and even Mrs More-Goose, the cook at Nottingham Castle who has a hidden identity. There's also Sir Richard at the Lee, a knight and agent of  the Archbishop of York, and of course Guy of Gisbourne, the last two acting as vehicles for Tidhar's characteristic noiriness. They play the shady fixer, the tough guy(!) who goes where others won't to serve a kind of justice. Or injustice.

It's a mark of how well Tidhar does this sort of thing that a concept like that - referring forward eight hundred years to a different world and a different medium - works so well in this book. It isn't, of course, the only one - the book is filled with allusions to music, books, media of all sorts, as well as historical parallels and comparisons that I kept thinking ought not to work but just do. There are, for example, numerous characters here who've been through horrors in the Crusades, things they can't explain to the civilians they meet but that others just understand. That haunts the book, bringing to mind so many wars over the past century and more. So many returned and haunted men. So many appalling sights and events.

At the other end of the scale in emotional terms are some really obvious references that had me grinning - a bar called Dick's ('Everybody comes to Dick's', yes I know), allusions to TV and films and, of course, sideswipes at more traditional depictions of Robin Hood (including, yes, That Song). The joke on those is that the Nottingham of The Hood isn't, in contrast to Robin of Sherwood and the like, the Nottingham of, er, The Hood at all. It's the Nottingham of whatever gang boss can hold onto it - be that a Sheriff (but Nottingham has a way with its Sherriffs), the daughter of a Jewish merchant, an enchantress, an alchemist in the vein of Dr Frankenstein or, well, you get the idea.

Like By Force Alone, the real action here is criminal: control of rackets, production and smuggling of substances, throat-slitting, the works. That coexists with a slippery stratum of forest magic, portrayed at the same time as made-up and as ancient and powerful. That world is populated by some of the same entities and forces as appeared in the previous book but it's not a neat, Neo-Classical pantheon but a confused gaggle of deities and powers scavenged from the mythologies of North-Western Europe and, of course beyond, this being an age of faith and the faith being that of Jesus. But it's also an age of commerce with a lively trade in relics, something that is at the same taken seriously by its participants and treated as a bit of a joke.

Maybe that's a key to the book as a whole - so much here is both presented as fake, artificial, mutable and as rooted, significant, serious. Sometimes it's at the same time, sometimes the treatment swings between the two depending which characters we're following and what they're doing. The way the book works kind of illustrates how historical figures and events we're used to seeing of thinking of in a certain way can also be shifty, contingent and make-do.

Historical figures and events including of course some key and cherished bits of (admittedly mostly made-up) British history. Which is of course Tidhar's point. It is a point he makes in a highly entertaining, and compellingly readable, way, one that leaves me eagerly looking forward to the next part of this rackety story of Britain.

For more information about The Hood, see the publisher's website here.