#Review - Girl in the Walls by AJ Gnuse 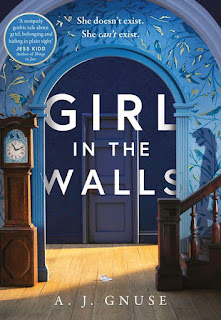 I'm grateful to the publisher for an advance e-copy of Girl in the Walls.

Girl in the Walls is an original and entertaining take on the gothi, in effect a story of confinement and strange events - the hallmark of gothic - told mostly from the point of view of the monster.

Not that it IS a ghost story - for the most part it's rooted very much in reality and the natural (although Gnuse's dreamy, philosophical prose blurs the divide between the natural and the weird). But to the family who share a house with Elise, she might as well be a ghost. Those traces of her presence - are they imagined or real? Even as she pursues her everyday life in the place she regards as home, the house she grew up in - eating, sleeping, watching TV, the only constraint being never to get caught by the family - they become increasingly uneasy, suspicious, listening for creaks or footfalls or for objects out of place, as you do when your house is haunted.

Elise's house is set in an ordinary suburb in a Louisiana city. It's subject to summer hear and to winter storms, and the idea family who dwell there do all the ordinary things - they go to school or to work, they attempt to fix up the rambling, over large place, they (especially the two teenage boys) bicker and ignore one another. Eddie, the younger child, is presented as a bit different, secretive, introspective, not- rather than un- social. His elder brother Marshall thinks he's a freak, and the pressure of dealing with the absence that Elise's presence creates adds to the strain of that. Eddie knows he is growing up, but he finds it hard to be in the gap between recent childhood and... whatever comes next. The growing and developing relationship between the boys was one of the great things in this book, as was Gnuse's ability to see the world through the eyes of a lonely and frightened eight year old girl - yes, that's Elise, hiding in the walls because she has nothing else but at the same time, unable to leave the house simply because she might find she has nothing. So long as she can convince herself that outside, all is well, and not allow herself to see the truth contradicting that, she's OK. Sort of.

But that kind of bubble can't last forever. There are forces moving beyond the walls of the house that threaten Elise. Human forces, and natural forces. The frightening denouement to the novel sees her face those threats, and survival will mean translating them into the reality of a young child who holds conversations in her head with Thor and relies on a scant few rescued possessions to connect her with her former life.

The conclusion to this novel is therefore dramatic and thrilling, the earlier part in contrast almost dreamlike, as it meditates on the paradox of being fully in and of in a place but not acknowledged or known there. There's an impressive balance between those two aspects, the more so because we, as readers of this book, will see all the ways that things might go wrong - apart from anything else Elise as a growing child won't fit between the walls for ever - even more so than she does.

That conclusion leaves us with a little thrill of doubt and uncertainty, as befits such a mysterious occupant of a house that turns out to be, in a sense, liminal, unfinished, accommodating people who are passing through but never quite make their mark. There is no neat tying up of loose ends, only hints.

Intriguing throughout, frightening in places, this is a book that builds up a deep bond with its characters - even Eddie's brother - and will leave you looking over your shoulder if you read it late and night by the fireside...

Email ThisBlogThis!Share to TwitterShare to FacebookShare to Pinterest
Labels: 2021, gothic, growing up, loss