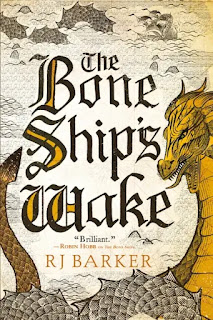 I'm VERY grateful to the publisher for an advance e-copy of The Bone Ship's Wake.

The Tide Child series - which The Bone Ship's Wake completes - give us that rare thing, a perfect trilogy. In these books Barker gets so many things right. Each part is a complete, exciting adventure in its own right. While telling an increasingly complex story as whole, one could still pick any of them up and enjoy it without having read the earlier parts (though why you'd deprive yourself like that, I have no idea). Each book is actually better than the previous one. While the setting is profoundly convincing and the events involving and exciting, Barker doesn't let them rule his writing. Because most of all, and best of all, at the centre of these stories is the most wondrous, gloriously portrayed, developing relationship, between Shipwife (captain) 'Lucky' Meas Gilbryn and her Deckeeper (First Mate) Joron Twiner.

I came to realise, and to love, that the plot - all the voyages, battles and double-crosses - and its motivation - the desire to escape the endless tyranny of the Bern - was pretty much secondary to that complex and evolving relationship. And that is good, because the dimensions of that central relationship - the secrets, the hurt that both have suffered, their prickliness, their faults - are so sprawling and angling, well, I could have read these books if they featured Joron and Meas having their chats on deck, and nothing else. Both are simply glorious humans. Put them together and Barker's writing simply soars away. It's just intoxicating.

Not, though, in case that gives the wrong impression, that the plot itself is inconsequential.  Far from it. As this third book opens (slight spoilers, if you haven't read the others) Meas has been captured by her enemies and is being tortured. Joron, determined to rescue her, has made himself into The Black Pirate, scourge of the seas, and is raging his way through the Hundred Islands' fleet, using the ships that Meas gathered in her mission to forge peace between the Hundred and the Gaunt Isles. In doing this he comes into his own as a leader, a planner and a killer. Nobody in these books is wholly good, or wholly bad: it's clear that Joron has done some dreadful things, Barker doesn't hide that. The ostensible goal in these books has shifted from defending the newly returned Arakeesians (great sea dragons) in The Bone Ships to forging that alliance for peace in The Call of the Bone Ships to this bloody quest for vengeance in The Bone Ship's Wake. More and more personal, less and less in service to the Thirteenbern, Meas' mother. And increasingly bound up in that relationship, that deep and profound friendship, that has grown between Joron and Meas since the day she took his shipwife's hat in the first book.

Behind all the salty nautical jargon, the lonely seas and the skies, the tactical problems and superhuman endurance and cohesion of the crews, we come to this. At last, in the closing pages of The Bone Ship's Wake, everything else falls away, everything is made plain (including things from the previous books that were less clear at the time) and we see the two, in many ways greatly diminished - facing overwhelming odds, nowhere to go - revealing, finally, what they mean to each other. NOT a romantic relationship but a strong and profound friendship and yes, a loving one, almost beyond words, tested and tried in fire and ice.

Of course, the supporting elements that made the previous books so readable - naval battle, the close observation of the little society aboard the Tide Child, the portrayal of the deeply alien yet very familiar world of the islands, the Gullaime and its kind - are lacking here. The Gullaime, in particular, takes a central role as we learn, finally, about its role, its hopes and its fears. (I love the Gullaime!) Those things are just as strong. But Barker has resisted the temptation to double down, to give us yet more and more naval battle, more and more ship-speak. We know he can do that, we know this world, we can feel it, smell it, taste it. There's simply no need to pile it on. We know Tide Child by know, we fear for him - but we know what he is capable of, in the hands of the deckchilder, that found family held together by a combination of fierce discipline and something like love.

But Tide Child is in new waters now, facing danger beyond anything we saw before, and possibly needing help beyond what the brave souls who crew him can achieve...

This final instalment is an epic, triumphant read, fully meeting the promise of the earlier books. Be warned, though - it's a true RJ Barker story, it may break you. Reading this book is like receiving a broadside from a ship of the Fleet. Once loosed, everyone is at risk, from the shipwife standing rigid on the deck to the deckchilder aloft in the spines. You'll not escape unscathed. Just trust in Shipwife Barker, who has brought us safe before through storm and fire and ruin and can do so again.

In short I'd STRONGLY RECOMMEND The Bone Ship's Wake.

For more information about The Bone Ship's Wake, see the publisher's website here.