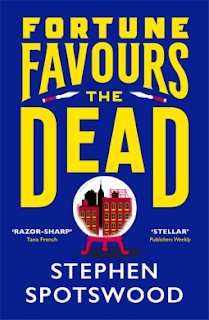 Fortune Favours the Dead (Pentecost & Parker, 1)
Stephen Spotswood
Wildfire (Headline), 12 November 2020 (HB), 22 July 2021(PB)
Available as: HB, 322pp, PB, 336pp, audio, e
Source: Advance reading copy
ISBN: 9781472274779 (HB), 9781472274816 (PB)
I'm grateful to Wildfire Books for an advance copy of Fortune Favours the Dead to consider for review.
If you're looking for your next detective series, and you want it to be smart, set in 1940s New York, to feature two women who'll take no nonsense from anyone and who are brilliantly realised and just, well, themselves - then this might be the book for you.
Fortune Favours the Dead introduces Lilian Pentecost, detective extraordinary and Willowjean Parker, her new protégé, lately of a travelling circus (where she picked up many useful skills including knife throwing, lock picking and escapology). Told in Will's voice, it ranges over three periods: the two women's first meeting late at night during the War, the notable case, a couple of years later, that is at the centre of the story, and a later perspective, the time from which Will is telling the story, allowing her to be somewhat self-critical, freighting the account with some hard-won knowledge about life, detective work and herself.
The setting Spotswood creates here is strong. Moving from the exciting world of the circus (Will acknowledges its drawbacks including both a gropy mentor and having to shovel out the tigers' cages) to Pentecost's HQ, a three storey townhouse with an archive, basement for combat practice, resident Scottish cook and a consulting room, taking in the world of the industrial elite and the clubs of queer New York where Will likes to spend her time, it has a great sense of place. The central mystery is fun - it involves both a locked room murder and a fashionable medium - but a Pentecost and Parker investigation will not allow itself to get distracted by flashy mechanics. The focus of the two women is very much on the "who" and the "why", with the "how" expected to follow so we don't get endless discussion of ingenious, but wrong, solutions to that puzzle.
Pursuing that "who" and "why" is what leads Lilian and Will into moneyed society which - no surprise - proves to be afflicted with the same human problems as everyone else.
I really enjoyed seeing Ms Pentecost and Ms Parker set about their case here. They are very unlike physically - Lilian has MS, which tends to frustrate and then she suffers after pushing herself; Will is strong and somewhat overconfident - but Spotswood catches, or presents, the ways in which they spark off and complement each other, showing what dear friends they are without ever quite coming out and saying it. There's a vulnerability here, hinted at by others in the book, both women are outsiders in different ways and in New York the pendulum is swinging back again from a degree of tolerance required during the war to - something else. I felt both that Lilian's imposing headquarters was a refuge, ands that it was threatened.
Overall, this book was great fun, showing how a humble "cirky girl" finds herself a new career, a home, even perhaps a family. The focus is on deepening relationships, rather than the details of crime, casting a bit of light on an era and place often seen through Hollywood and Broadway stereotypes. This will hopefully be the beginning of a fine series - I look forward to reading more!
For more details of Fortune Favours the Dead, see the publisher's website here.