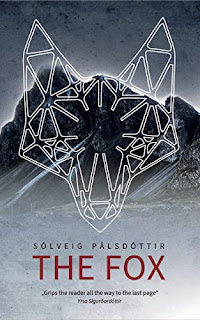 The Fox
Sólveig Pálsdóttir (Translated by Quentin Bates)
Corylus Books, December 2020
Available as: PB, 293pp, e
Source: Advance PB copy
ISBN: 9781916379732
I'm grateful to the publisher for an advance copy of The Fox to consider for review and for inviting me to take part in the book's blogtour. This is the first tour I've done with them - and I hope the first of many! Corylus is a newly launched publishing house, a brave step to take in 2020 of all years, and I wish them all good things.
The Fox introduces us to Guðgeir Fransson, a detective with the Reykjavík police who's under some sort of cloud, has been suspended and is waiting for a decision on the future of his career (and also, his marriage). Pálsdóttir only gives us hints of what happened professionally (a colleague and friend died, Guðgeir apparently made a mistake of some sort) and personally (there was an affair, he's estranged from his wife and has decamped to the backwater town of Höfn where he has taken a job as a security guard: the physical distance between him and Inga only seems to a be a barrier to resolving their problems). Guðgeir seems ambivalent about what he wants on either count.
While we shall, I hope, learn more about all this in future books, for now it's mainly background - but it does mean that Guðgeir is restless, poised between two futures and a past: unable to communicate with Inga, unable to commit to a new life and ripe for distraction. He's also a bit of an outsider in Höfn, with no inclination to take things at face value - and so inclined to take notice, when nobody else does, of a mystery on his doorstep.
A young woman, Sajee, originally from Sri Lanka, has been in the area but seems to have disappeared. The circumstances are, however, confused - Sajee arrived by plane from Reykjavík in the midst of a storm but has no connections in Höfn. She was heading for a job that doesn't exist. There is nobody to miss her. Everyone assumes she made her way... somewhere... but it's nobody's business to care whether she did or not.
Guðgeir has no standing to investigate, and he has to fit his enquiries around his job. He is also hoping to make an Easter visit home. Nevertheless, he takes an interest.
Pálsdóttir fully exploits the ambiguity of having part of the story follow Guðgeir and part Sajee, but being vague as to whether these strands are simultaneous and indeed, whether everything is being narrated in the order it happens. It would be spoilery to cast too much light on this - but I will say that we do, for much of the story, sort of know what has happened to Sajee, though not, quite, how things end up for her and therefore just how bad it will get. Pálsdóttir introduces a strange, reclusive mother and son - seen from Sagee's point of view - with a rather sinister backstory. It's clear early on that something is a bit off with them, but exactly what is masked by Sajee's unfamiliarity with Icelandic, culture and by tales of a "Hidden People" dwelling in the cliffs and caves.
We see Sajee try to integrate these stories with both her own culture and the limited amount she knows about Iceland. As a stranger, she's genuinely unsure how much credence to give what she's being told, and so are we. This device - not so much an unreliable narrator as a misinformed one, perhaps - gives the story a real sense of unease and menace, a vacuum in which anything is possible and in which we might anticipate all kinds of bad outcomes. That pressure is kept up to the very end of the book.
This is a story I sat up with well after midnight, I simply had to know what happened and how things would turn out. It is an impressive debut for Sólveig Pálsdóttir and, as ever, Quentin Bates' translation is lucid, unobtrusive and very readable - without over Anglicising concepts and language.
I will look forward to reading more about Guðgeir Fransson and his circle, assuming that mysterious enquiry absolves him for whatever happened - we will have to wait and see about that!
For more information about The Fox, see Coylus's webpage here, their Facebook or their Instagram. And follow the other entries on the blog tour - see the poster below. There will also be an interview between Dr Noir and Solveig Palsdottir on YouTube from the 10th of December, on the Newcastle Noir YouTube Channel here
You can buy the e-book from Kobo or Amazon. Paperback copies are available directly from the publisher (while stocks last!) - cost is £7.50 + £2.50 P&P for UK, and €8 + €4 P&P for anywhere in Europe, up to the end of December. Email: coryluseditor@gmail.com 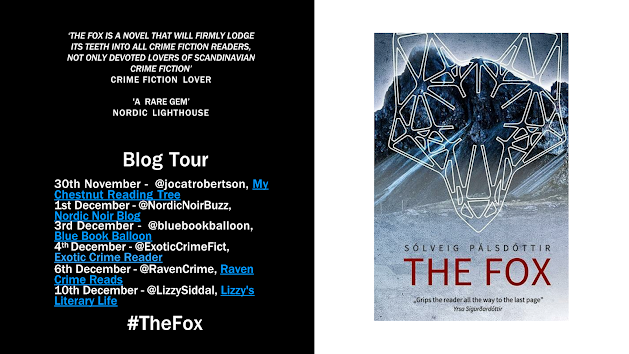