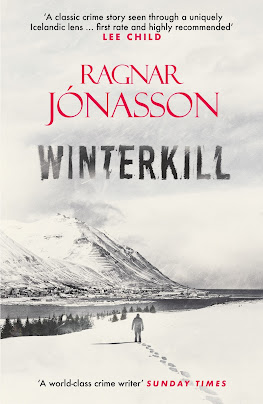 Winterkill
Ragnar Jónasson (trans David Warriner, from the French ed)
Orenda Books, 21 January 2021 (PB)
Available as: e, PB, HB
Source e: PB advance copy
ISBN: 9781913193447 (HB)
I'm grateful to Orenda Books for sending me an advance copy of Winterkill, and to Anne Cater at Random Things Tours for inviting me to take part in the tour.
Winterkill will be eagerly welcomed by Jónasson's many fans, returning, as it does, to Ari Thór, now promoted to Inspector in Siglufjörður, the most Northerly town in Iceland which we have seen previously in other volumes of the Dark Iceland sequence.
The book is pretty self-contained and if you're new to Ragnar Jónasson's writing it would be easy to start here but I'd advise reading the earlier books first - in publication order - to get the best experience. Ari Thór has been through a lot, and you'll understand him a little better if you have lived through it with him. Also, you know, spoilers.
That said, Winterkill does feel a bit like a coda to the series, offering a glimpse - a welcome glimpse - of Ari Thór's future. And how better to do that that though an enquiry into a mysterious death? Inner, a schoolgirl, apparently sneaked into an apartment block late on night, went up to the rooftop balcony, and threw herself off.
Or did she? Was somebody else involved? A cryptic message in Unnur's diary, and an accusation scribbled on, of all places, a care home bedroom wall, arouse Ari Thór's suspicions. It's inconvenient, especially at Easter, when his estranged partner Kristín has brought their son Stefnir for a rare visit. Their presence gives Ari Thór mixed - and conflicted - feelings about throwing himself into a case, but it doesn't cause friction with Kristín (indeed, it's painful to see this, demonstrating how cool things have become between them). We know, don't we, that Ari Thór will do the right thing?
As he digs into what happened, a strange and sad story emerges. Ragnar Jónasson rather brilliantly brings to life the character of the dead girl - while we never actually "see" her in the book, and she seems to left very little trace in life, what isn't here, combined with the evidence of her family and few friends, actually paints a powerful and arresting portrait of Unnur. It's all the more moving for not being obvious, overblown, or dramatic and it really made me wonder about all those people one meets who may have stuff going on which you just never suspect or know about. That impression is heightened with Siglufjörður being a place where, as Ragnar Jónasson demonstrates, almost everyone knows almost everyone else, or might even be a third cousin.
Can you keep secrets in a place like that? Apparently yes...
This is a very engaging book to read. Mystery and tragedy aside, Ari Thór's evolving relationship with Kristín and Stefnir is well conveyed and gives readers of the series some closure. And, murder and mystery aside, his relationship with his new protégé is rather amusing; Ari Thór sets out assuming that Ögmundur will respect and seek to emulate him just as he did with Tómas, but in fact Ögmundur seems an unambitious, incurious type who does the least he can and complains about being left to it when Ari Thór's not around! This crystallises a certain mood in the book. Ari Thór is torn between trying to revive or recreate the past (Kristín, Tómas) and pressing on into the future. Ari Thór once though he might have a chance of transferring to Reykjavik to work with Tómas again, but that seems off the agenda. Siglufjörður is developing, growing, finding new success in tourism, the place no longer being so cut-off as it used to be. Can Ari Thór adapt, or not?
Regardless, that modern infrastructure is still not proof against harsh Icelandic weather. The climax of the book comes in the dark when, just as the case seems to be resolving, a power cut descends on Siglufjörður leaving Ari Thór and Ögmundur stretched trying to cope with all the fallout from Unnur's death. It's a dramatic end to the book - and to the sequence - and one that captivates to the last page.
Finally, this edition is an English translation of the French edition. You might think that would distance the book somewhat from the mood and tone of the original. I don't know Icelandic (that would be wonderful!) so can't make that comparison but to me, David Warriner's English version captures both an atmosphere of darkness and the coming of change, Ari Thór's poised-ness between past and future among a fascinating community of people who are beautifully evoked.
The e-book of Winterkill is available now - see the Orenda website for sources and for more information. You can preorder the paperback from your local bookshop or online from Hive Books, bookshop.org, Blackwell's, Foyles, WH Smith, Waterstones or Amazon (NB some links to PB, some to HB, depending what the various sites offered!)
The blogtour continues!
For some more super reviews see the poster below. 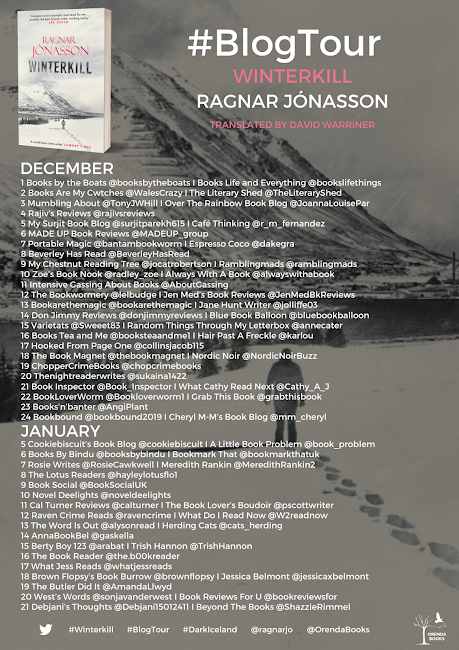