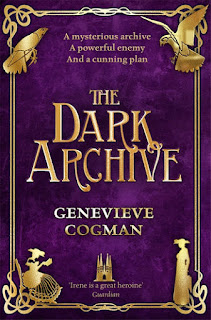 The Dark Archive (The Invisible Library, 7)
Genevieve Cogman
Pan, 26 November
Available as: PB, 318pp
Source: Advance PB copy
ISBN: 9781529000603
I'm grateful to the publisher and to Jamie Lee Nardonne and Stephen Haskins for an advance copy of The Dark Archive to consider for review.
A Great Detective...
I am delighted to report that, seven books in, the Invisible Library series still roars. In particular, Peregrine Vale is back - after being scarce in The Secret Chapter, as I noted in my review, he's at the centre of things here (maybe Genevieve was reading it!) in a book set largely in his world and mainly in London at that. Can it be that the Great Detective is about to find his match at last?
A Master Criminal...
London's criminal circles whisper of a new Napoleon of Crime, a person known only as "The Professor". Might they be the mysterious hand behind the attempted murder and kidnapping of Irene, Catherine, Vane and Kai? The forces of the British Empire, the dragons, the Library and even Catherine's Fae principal, the Cardinal, come together to crack the problem - but puzzling clues only abound.
A Librarian in peril
This time, Irene's not chasing down some key book. Rather, something seems to be chasing her. The Dark Archive is a rather different book, rather more focussed than previous volumes, less a heist than a cat and mouse game, a hunt. The politics between the dragons and the Fae is less important (though ever there in the background tension, especially as Catherine tries to be the first Fae to enter the Library). Instead, personal motives are to the fore. Irene's relationship with Kai is vulnerable to the whims of her masters and the prejudices of his family. Vale is always on the cusp of pursuing that Great Detective archetype and being contaminated, again, by chaos. Irene herself has family issues which come back to bite here. Any of these levers may be used - will be used - by the shadowy antagonist who seems to be coming for them - and for Irene in particular.
Is she, finally, out of her depth?
One of the things I love about this series - besides the delicious characters, the balance between real, blood-and-thunder adventure and peril/ irony/ humour - is the way that Cogman keeps reinventing her format and giving us something new. The first book, The Invisible Library, was itself a delight and I vividly remember both reading it (on the Eurostar from Brussels, as you ask, the gilt from the cover wearing off and making my business suit rather sparkly) and the feelings I had then. Every instalment since has touched the same places, but each is slightly different.  Rather than becoming formulaic, the series has grown and deepened. Irene herself has grown in self-confidence and status but without becoming an "insider". Kai's become less stiff, Vale more dependable - and now we have Catherine, Irene's new apprentice, and also Kai's brother Shan Yuan who rub each other up wonderfully. Catherine, in particular, is turning out a nicely complex character who subverts the expectations we might have of a Library apprentice as well as of a Fae, a race who have been depicted so far mainly as shifty antagonists.
Add to them Vale's mysterious sister, who is something very important in Government, and a reappearance by Inspector Sigh of the Yard, and it's almost as if Irene's building an army of her own...
In short, if you've enjoyed the preceding books I think you will love this one, knowing that it will be like them but will also give something new.  There are some hints of where everything might be going, but they are still only hints. The origin of the dragons, the eventual fate of the Library, Irene's own history - these all seem to be linked, but we don't yet know how.
Clearly there are more adventures in store and I'm very glad of that.
Finally, I just have to comment on that gorgeous purple cover. It's a beautiful thing, it really is.
For more information about The Dark Archive, see the publisher's website here.