#BlogTour #Review - How to Belong by Sarah Franklin

I'm grateful to the publisher for an advance copy of How to Belong to consider for review and to Tracy Fenton at Compulsive Readers for inviting me to join the book's blogtour.

I'm a fan of books that match well-drawn, interesting characters with a great sense of place, and How to Belong scores well on both counts. It's the story of Jo and Tessa, coming to terms with their pasts and with their lives when returning to the Forest of Dean.

Jo has been - is - a barrister. She's one of those who "got out", taking a degree and finding a glamorous job in London. Or not, because once there, she found, of course, that it wasn't all as shiny as she hoped. Life was an endless slog round the country, working on dispiriting cases for clients who scarcely seem deserving, arriving back on late trains from distant courts. All the plum work goes to the men, she's pretty friendless in London and even the money isn't very good. So coming home for Christmas and finding herself in the familiar hubbub of the family butcher's shop strikes a nerve with Jo, especially as her parents are about to sell the shop and retire. Maybe taking over the shop might be a way to return to the familiar, and preserve her family heritage?

Farrier Tessa has also come back to the Forest - after her relationship with Marnie in Bristol ended. Emotionally bruised and struggling with a debilitating illness, she's drawn the circles of her life tighter and tighter to protect herself. Finally, she holes up in her cottage in the woods, struggling to make ends meet on the tiny amount of work she can do.

I loved the way that Franklin depicts these women, giving us flashbacks to show their earlier lives and the wounds and struggles that have made them.

Jo is bright and intelligent and full of plans and ideas. We are told that her career as a barrister has given her resilience and an ability to deal with people, yet she can also get things so, so wrong: with Ron and Mo, who run her parents' shop, with old friend Liam - at times, it's hilarious to see Jo's mistakes. Moreover, she can scarcely bear the smell and texture of fresh meat so at one level it seems slightly comic that she would take on the butcher's shop, at another, it is rather noble and admirable.

Tessa's wounds didn't begin with her and Marnie's break-up: there was a shocking event that cut to the core of her family and for which she has assumed responsibility and a resulting belief that she's hateful and can come to no good. The forest seems a good place for Tessa to hide away, to not be known or recognised.

It doesn't work out as either expects, of course. There are many eyes in the forest and Tessa is observed and remembered, while Jo finds that her friendship group has moved on (and her family house sold). Many outsiders are coming to the Forest with new estates spring up where the sheep grazed and second homers appearing. Is Jo, despite her origins, really one of them - an urbanite with over romantic views about this place stuck between England and Wales, with its own history and traditions?

The interplay between Tessa and Jo, and also Jo's relationships with Liam and with Ron and Mo and indeed her parents (largely absent though they are) makes a fascinating character study. Franklin lets things build up slowly, with plenty of time and space for each of the two women, and allows us to draw our own conclusions about what's going on rather than having her characters tell us. The Forest is almost a character itself, and we see both the pluses and minuses of increasing tourism and of "incomers" - as well as the resilience of the Forest people themselves. Best of all, perhaps, the ending is left tantalisingly open. I think I know what's going to happen, but as Franklin has shown, Jo and Tessa are real people with real quirks and with their own histories, so really, who knows what comes next?

For more information about How to Belong, see the publisher's website here - and also the other stops on the tour, listed on the poster below!

You can buy How to Belong from your local highstreet bookshop - many are still open for orders even if you can't browse - or online from Hive Books, bookshop.org UK,  Blackwell's, Foyles, WH Smith, Waterstones or Amazon. 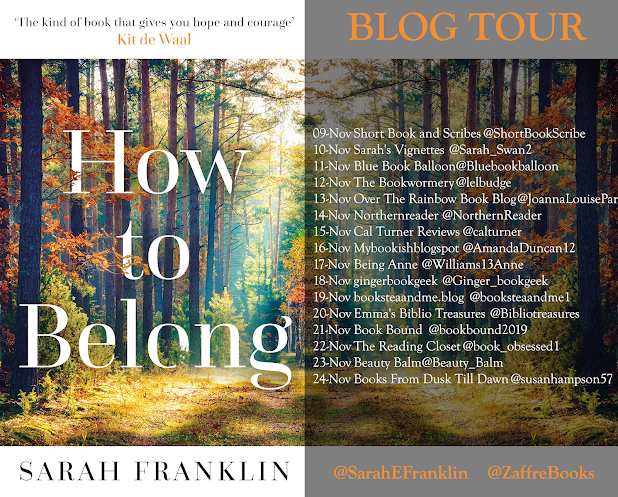