Review - The Twelve Strange days of Christmas by Syd Moore 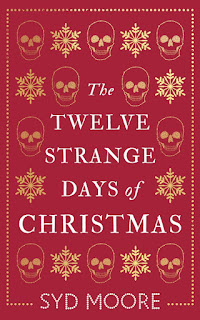 I'm grateful to the publisher for a free copy of The Twelve Strange Days of Christmas to consider for review.

These are short stories which take place in the world of Moore's Essex Witches novels - supernatural thrillers focussed on Rosie Strange and her family museum in the village of Adder's Fork, Essex. The Strange family and its history entwine with that of the Museum which is itself a slightly uncanny place.

The stories fit with the wider series in a number of ways, variously taking place in Adder's Fork, featuring minor characters from the books or members's of Rosie's family (including Septimus himself), narrated to familiar figures or, in a couple of cases, I think anticipating future books. A couple are not, perhaps, strictly ghost stories but they slot in very nicely with the general theme which is of course death is a common - death anticipated, death mourned, death overcome - death awaited.

The collection does feature some stories which were in The Strange Casebook published last year but there are as many new ones, and the older stories stand up very well to rereading. If you've read and enjoyed the Essex Witch Museum books you'll have the chance to spot how the stories fit in to that world.

Septimus and the Shaman sees Septimus Strange recounting a wartime episode that took place while he was on active service. As well as shedding light on just what he got up to at that time (and perhaps his wider connections with the Establishment) it also contains a warning and some hints about Rosie's future.

Snowy is a gentle hymn to death and loss and perhaps - perhaps - to consolations beyond.

The House on Savage Lane, and Jocelyn's Story are stories of a slightly different kind, the sort where the revelation of what is really going on is what drives the horror (even if you'd begun to guess as I did for the first, not the second) so I won't say much about them. I think they look forward to potential future Witch Museum mysteries. I especially found Jocelyn's Story to be genuinely strange and unsettling. The House on Savage Lane was a bit more conventional but still had a couple of effective twists.

Easily Made is a kind of sequel to Snow, introducing a different kind of horror.

In the Bag is a classic ghost story, with a humorous twist on death and revenge.

Death Becomes Her focuses on a policewoman we have seen before, and perhaps explains a bit about her.

She Saw Three Ships is a delight, a whole story featuring Ethel-Rose and taking place in that most ghost haunted and uncanny of English counties, Cornwall. What happens when the locals make you unwelcome on the eve of a creepy local festival? Well, you dig in and see what happens, obviously. This slice of folk horror is calculated to raise a shiver.

Madness in A Coruña is the longest story in the book, and is an effective and creepy ghost story, perhaps with an MR Jamesian bent. An unwary traveller to the Spanish city (yes, the same as in the poem by Charles Wolfe) discovers mysteries. The city seems to be guarded against something. But is it guarded well enough? As this story came to a climax I found myself sitting forward and gripping my Kindle, so tense did it get.

Christmas Eve at the Witch Museum is a real joy, a little slice of life at the Museum. It's all much as you'd expect, with Rosie hanging up the mistletoe and thinking thoughts of Sam, some gruesome exhibits on display and a surprise appearance by a very English phantom.

Barefoot Through the Snow is  a delicious, sad, classic ghost story fitting well into the Witch Museum mythology - the stories of innocent women tormented and put to death - as a mother seeks out her children across the cold, cold fields. It suggests some unfinished business that perhaps Rosie will be able to sort out one day?

A Christmas Carole is, as the name suggests, Moore's version of a time hallowed classic, one without which no collection of Christmas ghost stories would be complete. It's familiar, but she also gives it a distinct twist and make sit her own.

These are great stories. They will mean most to those who are familiar with the Witch Museum series, but the collection as a whole may be read as an entertaining and chilling group for Christmas. While some have appeared before that was in an e-only version and you'll want a print copy of this to live on your shelves next to the other Strange books, won't you?

For more about the book see the publisher's website here.