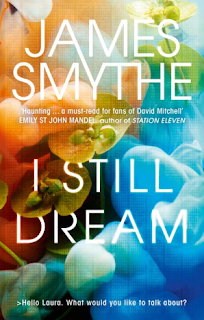 I'm grateful to the publisher for an advance copy of I Still Dream through Amazon Vine.

In 1997, 17 year old Laura Bow argues with her mother and stepdad over the phone bill she piles up dialling in to AOL.

In 2007, Laura split up with her boyfriend who works in the same Silicon Valley tech startup as her.

Each time, her story intertwines with the development by that same tech company of the AI known as Scion - and by Laura of her answer to Scion, her riposte, her own creation, Organon. In one sense this is a story of what tech might become, what it might do to us, as Scion - taught to win, to protect itself - becomes embedded in almost every conceivable product and Laura tries to warn us against it..

At the same time, it's the story of Laura, her husband Harris, their extended family: his father, her mother, of ageing, of decay (in one moving sequence the two see a parent being overcome by early-onset dementia). But that also means it's a story of youth, of growing up, with Laura's 80s/ 90s childhood and adolescence drawn very touchingly, mixtapes, modem squark and all and then carried through into her adult life. Smith has a clever technique of putting things in that you don't see properly until some later detail, remembered in a later decade, tips you off to what is going on. It underlines an idea he explores that memories are reconstructed, dressed up, inferred because of course this "seeing properly" is construction that depends on the two different viewpoints - a kind of temporal hologram. I don't want to spoil the book so won't mention specifics but you'll find there are things about, especially, Laura's life that are revealed later which make you think, of course. But then you wonder...

This richness makes the story so real. The reader becomes aware that there is always more happening than is seen - which complements its jumping from decade to decade, only describing few days, a few hours, in detail. Smythe does something similar with his dialogue, understanding that what's not said is as important in conveying what's going on as what is said (I don't say, what the fuck happens if this goes wrong? If he crashes the car? Because Nor, and Zara? They won't walk away from this.)

A kind of shorthand for the decades-long, unfolding dialogue here about AI, personality, autonomy and privacy is the varying use of pronouns (he, she and it) for the two "intelligences" by different characters. Not consistent at all, we see differences in attitudes conveyed by these terms, as well, of course, as the developing capabilities of, and lengthening relationships with, Scion and Organon. As the story develops, it explores - but not in a tech heavy way - the ideas behind AI, the reality of it: the difference between a machine built to done thing - say, to play chess - essentially a trick - and something that can grow and learn - and the responsibility of a creator in the latter case. This is counterpointed by the theme of decline in capability, loss of memory and ability: again, the contrast between growing up and ageing. We see a husband and wife making breakfast together in a kitchen,  she working seamlessly to make up for his slips and mistakes, the motions almost balletic, almost unconscious, just as - we think - the surprisingly acute remarks of Scion and Organon are unconscious, non-sentient.

This is all deeply rewarding and repays a second or third read, but I don't want to give the impression that this book is all beautiful observation and no plot. There are some thriller-y elements to it, with Laura pursuing her own struggle to secure her father's legacy in tech, with whistleblowers and a crusading journalist, and the extended timeline lets Smythe show how things turn out over realistic periods of time.  Again, we sometimes see an episode unfold but don't learn how it turned out until a later section, just as we don't actually get an answer to the main mystery looming over the story - what became of Laura's father - until near the end, in the only section out of chronological sequence.

For me, that was actually one of the less satisfying parts of the story. Laura's father is such an absence in this story that he's almost a presence: his absence drives the story, drives Laura. It's a very good use of what has become quite a common trope and one feels that there must be something really dramatic behind it. Yet while there is certainly a story there, which is interesting in its own right, when it was revealed, it didn't quite match what I'd been imagining.

Perhaps there's a lesson in that - the drama of this book is very much in the personal things, Laura and her husband, the slow development of Organon (and when you finish the book you realise just how clever Smythe has been in showing that evolution), happy and sad events remembered decades later. And that makes for a very, very good read.

Congratulations to James Smythe for writing this immersive, arresting, uncategorisable novel. I wished it had been longer, I really did.

For more about the book, see here. You can buy it from your friendly local bookshop, or here, here or here.