Review - The Chosen Ones by Scarlett Thomas 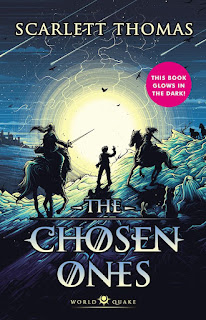 I'm grateful to the publisher for an advance e-copy of this book via NetGalley. (I will be buying a copy too - look at the GLOW IN THE DARK cover!)

THERE IS MAGIC BEYOND THE REALWORLD...

EFFIE TRUELOVE has learned to travel through magical books to the Otherworld.

MAXIMILIAN UNDERWOOD, Effie’s classmate, is more interested in the dark and forbidden Underworld.

When Effie and Maximilian both mysteriously vanish, their friends Raven, Lexy and Wolf don’t know where to turn for help. Raven is a witch and her horse, Echo, has revealed that Effie is in deep danger and time is running out.

This is the second book in Scarlett Thomas's Worldquake series of children's books, following the adventures of Effie and her friends at the Tusitala School for the Gifted, Troubled and Strange. Their world is like ours - yet changed, in a way that is never quite described, by the Worldquake itself, which happened several years before at the same time that Effie's mother vanished. The effects of the Quake leave electricity scarce, the Internet flaky and a mysterious (and seemingly hostile) Guild in charge of magic.

And yes, there is magic here. There are journeys to other dimensions - the Otherworld and the Underworld. There is the (to a bookworm) entrancing idea that if you are the Last Reader of a particular book, you can be taken into it, experience the story, and return with "boons" - magical gifts that bestow abilities or confer protection.

This world was introduced in Dragon's Green, together with the idea that "Dageri" - book eaters (the horror!) - are preparing a bid for power. Effie and her mates defeated that plot, but the risk hasn't gone away. When copies of The Chosen Ones, the bestselling story of magical children written by Raven's mum, Laurel Wilde, begin to be bought up by the publisher, and Effie is the subject of a scary prophecy, it looks as though something's up again.

The Chosen Ones introduces us to wider aspects of this world - I don't think it was clear before that it was Earth: the action took place in a vaguely placed and unnamed town with no further details, but in this book we visit London and hear about other countries. Effie's group also encounter another school (in the course of a tennis tournament) - the pupils of Blessed Bartolo's are unpleasant to put it mildly, with "compulsory classes in fencing, stockbroking, dressage and advanced music competition". And they are pretty ruthless at tennis, giving Thomas a good chance to describe the play - it's clearly something she knows well (as with Raven's horse riding across the moor near her mother's house).

As well as exploring their world, in this story, Effie and the others begin to find out more about themselves too and how they fit in with the magic around them. This is partly through the advice in a book called The Repertory of Kharakter, Art and Shade (I want a copy!) which applies a system that reminded me of a roleplaying game: we already knew that Effie was a True Hero, now we discover what the other possible "Kharakter" types are and also that one has a secondary class, an "Art". It's a neat way to represent the experience we all have of wondering who we really are and what we are meant to be - not least because Thomas then throws some doubt over the who idea: there are traps as Effie tries to pin things down, and people who try to exploit her even as she searches for herself.

All this depth doesn't prevent The Chosen Ones being an exciting story, fast paced where it needs to be but also happy to ramble a bit, to give all of the kids adventures of their own even if these don't directly relate to the main story (or not yet: "Terence clearly had no idea how dangerous librarians can be, but that is a story for another time...") which contributes to the sense of this world as a rich, many-layered place.

Thomas has some fun in this book with the world of publishing. Not only are the magic-using children in Wilde's The Chosen Ones born that way (unlike the kids in Thomas's world where magic is scarce, but anyone can learn, if they try) but "they were all white... The Chosen Ones was set a very long time ago when people... spent their summer holidays being locked in the cabins of ships or kidnapped by gypsies." Laurel's publisher, Skylurian Midzhar, is a bit frightening as is children's author Terrence Deer-Hart who actually hates children and wants to write for adults. ("His books were far more distressing, complex and violent than Laurel Wilde's, though, and one of his books for older children had over a hundred swear-words in it.") The Matchstick Press logo is a matchstick propping an eyelid open. We are told that "the thing any author hates more than anything... is... other authors.

I enjoyed The Chosen Ones a lot. It picks up the threads of Dragon's Green and moves things on pretty sharply, letting us know a little more about the mystery surrounding Effie and the rest (but I'm sure there is plenty more to be revealed) and making sure the challenges they face are serious enough that they can't simply be brushed away by the abilities gained in the earlier story. In short, it feels real, challenging and interesting.