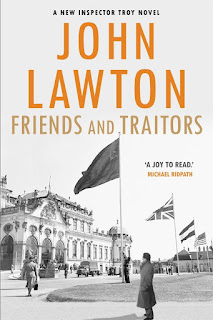 I'm grateful to Ayo and to the publishers for inviting me on the blogtour for Friends and Traitors and providing me with a copy to review.

If I were looking for a snappy title for this review (as for example you have to on Amazon) I might lift a phrase from the novel itself and use "The Burgess Game". The spy, traitor and (in this book) friend Guy Burgess is at the centre of this intricately plotted, chewy novel.  (In case anyone doesn't know, Burgess was a real man, one of a famous spy ring composed of ex Cambridge men who, working for the USSR, blew the UK's spy service, MI6, apart in the 1930s, 40s and 50s. This caused ructions even into the 70s and 80s. I remember the fuss when it became generally known that one of the group, Anthony Blunt, had been protected by the Establishment he betrayed and given a cushy job counting the Queen's pictures; and when the self described "spycatcher" Peter Wright published his memoirs - without official approval, and banned in the UK - in 1987s, alleging that another senior officer, Roger Hollis, had also been a traitor).

Here, Lawton devotes ten years or more of the life of his fictional detective, Freddie Troy, to a tale that unfolds in a leisurely fashion, as the lives of the two men cross and recross - from Freddie's early days as a naive police recruit to his ascendency to the rank of Detective Chief Inspector in the Murder Squad at the Yard. Treading lightly around various cases documented in earlier books of the series, and revisiting some earlier characters, Lawton uses the world he's created to give a convincing depth to the story although this does mean that in the earlier sections Troy does comparatively little (you can't meddle with an established timeline!) and the burden of the story is with Burgess.

Rather, this part of the book is used to good effect to convey some of the moral ambiguity necessary to understand a man like Burgess and also the attitude of his friends and acquaintances. Burgess is suspect from the very start: Troy's emigre Russian family have him pretty much nailed. (They are rather grand - as a policeman Troy's wealthy, well-connected and possessed of a small house in the West End, making him something of a ringer for Margery Allingham's Albert Campion - complete with a hefty Cockney manservant). Yet nobody thinks to report their suspicions and Burgess continues to waft through Society and through the supposedly secret world, hiding in plain sight, surely too indiscreet and unreliable to really be what he appears? Can we trust our judgements here? Perhaps seventy years of Cold War and terrorism have made us all cynical and incorrigibly suspicious about such things, and the answer to the success of Philby, Burgess, MacLean and the rest (Third Man, Fourth Man, Fifth... that's "The Burgess Game" I mentioned above) is less a sinister Establishment conspiracy than an attitude we simply cannot, in these more devious times, now understand.

Whatever, Lawton does an excellent job of bringing alive older attitudes and dilemmas. Troy is, we slowly learn (even if we didn't know before) morally compromised in various other ways, with his (perhaps) turning a blind eye to Burgess a comparatively minor matter. As somebody points out here, British spooks tend to die near Troy. When Burgess reaches out to Troy for a chance to "come home" and Troy is drawn into a catastrophic operation in Vienna, his past comes into question as never before. Which is where Lawton's clever recapitulation of those ten years really pays off. There is, you sense, real jeopardy here, real skeletons that might claw their way into daylight - and real risk to Troy's life, liberty and relationships. I felt especially for his brother, a rising politician, and for his partner, Shirley Foxx (who has her own reckoning with her past as well the possibility of being hurt through Troy).

There is also - and without any anachronistic imposition of 21st century attitudes - the matter of Burgess's sexuality. He is a gay man, in a milieu of gay men (as well as a wider, Blitz induced, sense of moral freedom in which other characters, including Troy's sisters, take part) and this brings a hovering sense of danger to him (though in the end, it is not Burgess but someone else who suffers directly from prejudice on this score).

It is, as I said, meticulous, clever and well observed, the kind of book you need to read slowly and carefully because every line, every word matters. Which is as well, because it's also a book to be savoured. With its pages crowded by spies, femmes fatales, detectives, old friends and enemies and, yes, traitors as well, it can be appreciated as a masterpiece of atmosphere, character and motive as much as a thrilling story and continuation of Troy's career. 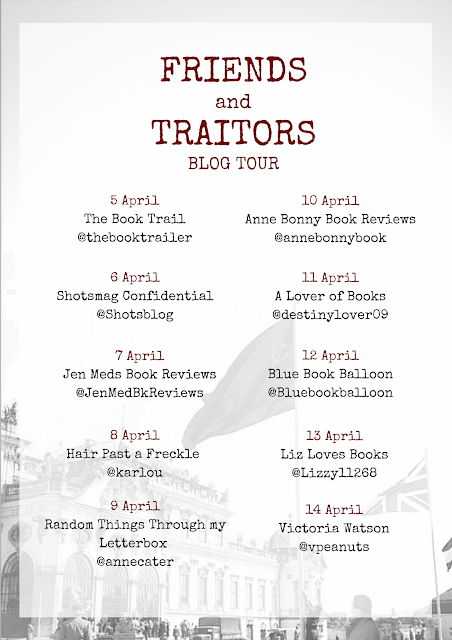