Review - The Things We Learn When We're Dead 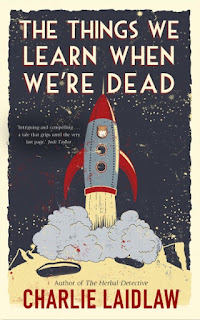 I'm grateful to the author for a copy of this book for review (indeed, a signed copy).

I don't tend to be over fussy about genre labels for books, but sometimes it can be enlightening to consider where in the shop you might find a particular one. Things We Learn... is one of these. It is a really hard book to classify. From a simple precis - Lorna Love dies in a road accident and wakes up in Heaven, attended on by God (and Irene), but it turns out that Heaven (or rather HVN) is a super-advanced spaceship whose presence near Earth has inspired the entire corpus of world religions) - you might be forgiven for assuming this is SF, perhaps in a Douglas Adams-ish vein.

And that is certainly true, up to a point. Spaceships, hyperspace drives, the possibility of things being in more than one state at the same time, all come up in the story.

They aren't, though, the heart of the story. To capture that, I think you'd have to cast your net a little wider. The process which has brought Lorna - apparently in perfect physical health, apart from a recurring headache and a pain in one arm - to HVN has also preserved her memories, but they are jumbled. So through the course of the book she is relearning who she is (was), integrating this and reflecting on the events of her short life. She has, as it were, been given an opportunity to ponder on how she lived and what she did and to explore it. That is enabled by the way that the authorities in HVN attempt to replicate the significant landscapes of Lorna's life, from the high street in North Berwick, Scotland, where she grew up to the sand dunes where she first had sex. It's all superficially convincing, but Lorna sees through it. Still, it shows they care.

(If that sounds to you rather less like Heaven as traditionally envisaged than something more like Purgatory, then you need to remember that in the world of Things We Learn... religions are simply echoes or rumours of a hippyish captain (God) stranded with his dwindling crew on a disabled spaceship infested with hamsters (really!) So we might have got things a bit mixed up.)

What is at the heart of this book, then, is that recapitulation, that reassembly by Lorna, of her lifetime and her memories.

Her weak, alcoholic father who crumples when he loses his job as an insurance clerk.

A holiday the family took just before things went wrong.

Her job working in an Edinburgh supermarket. (Laidlaw has a gift for creating characters, peopling with book with individuals who aren't heroes, villains or symbols but real figures who are there because they belong - I'm thinking especially of those colleagues).

Abobe all, her best friend Suzie. The portrayal of Lorna's and Suzie's friendship is excellent. It was formed in their schooldays but endured as their paths diverge, Lorna studying law and Suzie becoming a model and actress. Their friendship is a delight. With all its ups and downs, they are (mostly) there to support each other, sharing everything. That friendship is though as much a source of guilt to Lorna, once in HVN and remembering, as it is of comfort. She has to admit to herself that she has done things that she ought not to have done. Laidlaw weaves a convincing and interesting story out of the ordinary details of Lorna's life.

It's this central preoccupation with Lorna's actions and their consequences that makes me question a simple label of SF for the book. That isn't meant to sound anti-SF and snobbish, what I mean is that in a sense the spaceship stuff is really just framing for this central story. Lorna could just as easily, say, have been kidnapped, or stranded in a remote airport in a snowstorm and forced, or enabled, to consider her life. That would, though, take away the humour that lightens this book. The breaks provided by Lorna's encounters with chain-smoking Irene, with God or when strolling in the obviously fake world delivered by Trinity, the AI who runs HVN, do allow Lorna's own story to breathe, as it were. It would also - and this is hard to put well without spoilers - be more objective, less about Lorna and her world and more about what is done to her. If there's one thing in this book which is clear it's Lorna's agency (apart from that accident) that drives events and in a sense which becomes clear in the end, HVN reflects that, too.

Ultimately, the juxtaposition of Lorna's life on Earth with her reflections on them in HVN makes this book very much a matter of life and death, Laidlaw providing an enthralling and different take that is at the same time a captivating story.