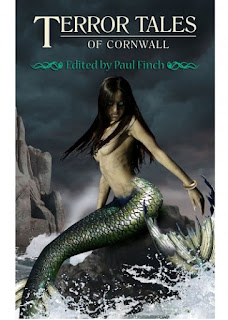 This review first appeared in The Ghosts and Scholars MR James Newsletter, No 32, Autumn 2017.

I'm grateful for a review copy of this book.

This isn’t a collection of traditional ghost stories or folktales. Rather, the stories in this book are by modern authors. Between the stories are short essays about mysterious Cornwall, and about some of the authors who have been inspired by it. Here we meet Daphne du Maurier, but also the Morgawr, or Cornish sea-monster, fairies, piskies, giants, smugglers, murderers and many more. These sections draw both on traditions and more recent sightings and claims. These essays don't attempt to introduce the stories directly although there are some resonances - but they powerfully add to the mood of the book.

There is a good overall liminal sense to this collection. A county unlike any other in England (I write "in England" advisedly, given some of the content here), Cornwall juts out into the Atlantic Ocean, putting it at more than just a physical distance from the rest of the country. There are other boundaries as well: the distinction between the remote, inner landscape and the popular seaside resorts; between the locals and the visitors; the new and the old; the safe and the - unsafe. Boundaries seem to be especially significant places in horror. We can approach them. We can get too close. Things can come over. All of this creates endless opportunities for that chilling feeling you get when, on the warmest day, a cloud hides the sun.

And the authors take full advantage. Tasked with writing tales "of Cornwall" some have produced stories that draw heavily on Cornish tradition, atmosphere and themes, while some are simply set in Cornwall (and which might perhaps have equally been set anywhere else). I'm glad to say that the former are in the majority as that seems more in the spirit of the exercise, although there are some strong stories in both categories.

The book contains sixteen stories in all. In We Who Sing Beneath the Ground (Mark Morris) a dedicated teacher crosses a boundary when she follows up a non-attending pupil, turning up late one evening at the dilapidated farm where he lives to find all the lights out. But there's worse to come. This was a good opening story, bringing in a distinctly Cornish angle as well as an element of the fantastic that fitted well with the guidebook-style commentaries on Cornish myths and monsters that alternate with the stories themselves. As its title suggests In the Light of St Ives (Ray Cluley) also features light and dark, when a young artists tries to erase her work because the colours – particular colours – are seeping out. Again this reflects a distinctly Cornish theme - the artistic colony of St Ives – and has a nice effect of "pleasing terror" as we gradually discern what is wrong.

Trouble at Botathan (Reggie Oliver) is an authentically Jamesian story in which a young undergraduate discovers a harrowing narrative hidden in the library of a remote house on Bodmin Moor. It reveals a ghastly crime, and takes him out to a mysterious wood with its own guardian.

Mebyon versus Suna (John Whitbourn) begins as a more lighthearted tale and one which takes place outside Cornwall. It illustrates what happens when frictions between the Celt and Saxon come to the surface in the borderlands between two ancient kingdoms (and also perhaps pokes gentle fun at modern nationalisms which see the past through such 19th century, invented lenses). There is less terror here, perhaps – or so it seems – but there is a nice twist.

The Unseen (Paul Edwards) is perhaps only incidentally Cornish but is a horror story that would feel perfectly at home in one of the classic 1970s Pan anthologies, focussing on a particularly nasty DVD and a, shall we say, lacklustre father who allows his obsession with it to lead him astray. it's effective, nicely done and will stay with the reader. Dragon Path (Jacqueline Simpson) on the other hand is wonderfully shameless in its pillaging and piling up of the most vainglorious aspects of modern Celticism and New Age syncretism, to the point where you feel that in his showdown on Bodmin Moor the central character Mick is really going to come unstuck. But then something very nasty happens and it becomes a very real story. Great fun.

The Old Traditions are Best (Paul Finch) draws on that eerie atmosphere that can attend a fair, a carnival or - as here - a village festival (the scariest killings in Midsomer Murders take place at the Village Fete, don't they?) when the masks, the costumes and the ritual take over and the humanity is lost. Again drawing on custom and tradition, this was one of my favourite stories in the book

The Uncertainty of Earthly Things (Mark Valentine) arguably isn't actually terror or horror, it's more one of those epiphanies where a veil is split showing something else behind the solidity of life. The indifference of that something can provoke horror, blessed relief or curiosity. Here, it's a mixture of the three. This was another of my favourites, not least for the contrast between the cosy, dusty life of its museum curator protagonist and the truth of what is revealed.

His Anger Was Kindled (Kate Farrell) is genuinely spine chilling, even if, I think only Cornish. I enjoyed the collision between a single minded elderly clergyman and the bureaucrat despatched to fire him (even if the story does ride roughshod over how things actually happen in the Church of England). Another story that simply uses a Cornish location is Four Windows and a Door (DP Watt) allows childlike innocence to collide with something very... un-innocent. All the stronger for being, at its heart, mysterious, this story does share a feature with The Memory of Stone (Sarah Singleton) - a father who, following a catastrophe, retires to brood on the Cornish coast. Watt's protagonist is easier to sympathise with than Singleton's, a middle aged man who turns stalker when he meets an attractive young woman, thereby bringing disgrace on himself and I found myself rather hoping that the strange pebble-leaving creatures would harm him. But maybe they're just an externalisation of the shame and self disgust he feels?

Claws (Steve Jordan) echoes The Old Traditions are Best in exploring brash, jangling creepiness - this time of an amusement arcade. The Cornish angle comes from the presence of something else, something bent on making mischief. Again, in the way that this something strikes against guilty and innocent alike, the story provides a true sense of horror as does A Beast by Any Other Name (Adrian Cole) which is, surprisingly, the only story in the book to feature the mines and caverns of Cornwall, pairing them with another legends, that of the Beast of Bodmin. But something more evil, more dangerous than a mere monster is at work here. A creepy, effective story – one of those where a subtle change at the end casts a new light on the earlier narrative.

Moon Blood-Red, Tide Turning (Mark Samuels) is another little mystery. Creepy, not particularly rooted in anything Cornish, it takes its impetus, as it were, from the artifice of the theatre. Still chilling, mind.

In Shelter from the Storm (Ian Hunter) a group of Explorer Scouts on a training walk take shelter (from a storm) and foolishly stumble into something ancient that they ought to have left alone. While pretty chilling, I felt at times was slightly stretching what the boys would actually do – yes, I know, going into the old creepy house/ castle/ church despite the obvious scariness of the place is a bit of a cliche and Hunter provides good motivation for that, but perhaps less so for what they do next.

The last story, Losing its Identity (Thana Niveau) was, for me, the strangest in the book (and my very favourite). Framed by extracts from the Shipping Forecast, that invocation of British maritime topography, it is almost science-fictional in one respect, the treatment of a future of rising sea levels and increasing storms which is, bit by bit, drowning Cornwall. There's nothing supernatural, nothing eerily or creepily horrible in this and in some respects it's rather a gentle story. But it is one that rather haunts me.

Overall, this is a strong collection. The "Cornish" theme, however the particular authors choose to interpret it, delivers a focus which adds to the overall sense of place. For example, we hear the same place names repeated from story to story. A grumble in one story about the time taken to get to Penzance on the train sheds light on a couple of others. The factual information about wreckers and the murder of shipwrecked sailors is at the back of one's mind in one or two other places even if those aren't central events in them, as are the more modern examples of the weird which add an "anything can happen" sense to the stories (which are mainly set in the present, or recent past). Perhaps most of all, the sheer chanciness of life on this peninsula, especially when that life depends on the sea, injects an element of potential danger and menace that pervades every story in the book, almost as though the reader can taste the salt and hear the murmur of the waves.

Strongly recommended, whether you are after a good tingle of terror or just a dollop of satisfying atmosphere.
Email ThisBlogThis!Share to TwitterShare to FacebookShare to Pinterest
Labels: 2017, Cornwall, Ghosts & Scholars, horror, Terror Tales series