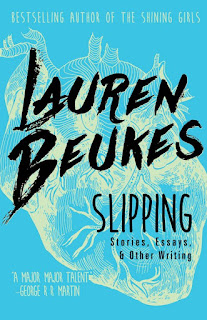 I mostly knew of Beukes as the author of smart, twisted SF or fantasy - though it was clear from The Shining Girls that she was also a committed journalist - and I certainly hadn't read any of her short fiction. So this collection was enlightening in a number of ways.

The book collects 21 short stories, written over a decade or more both before and around Beukes' 4 published novels, and 5 pieces of non-fiction. There is also a glossary which may be useful if you're puzzled by some of the South African language used here.

In one of the non-fiction pieces, 'Adventures in Journalism', Beukes sets out what you might take as the manifesto for this collection: '...my job sent me careening around the city from rough-hewn Bellville (cellular chip technology, kiteboarding) to an exclusive boys' school in leafy Rondebosch (teen sexuality) to the low-income apartheid estate Bonteheuwel (graffiti artists, taxi drivers).' Driven by her desire to learn, to understand and to communicate, she flits around, taking in all the breadth of human life (and death).

Similarly, this book explores the boundaries of the weird, the fantastical, the outrageous, from an obsessed stalker who's invaded her girlfriend's home ('Dear Mariana') to an occupying army carrying out torture on captive aliens ('Unaccounted') to a fraud perpetrated by 419 scammers ('Easy Touch'). In some of these you can see ideas developing that resulted in full length novels - part of the background of 'Zoo City' was those same scammers, and 'Branded' reads like backstory to 'Moxyland'. Others are standalone (or haven't resulted in full length books yet...) or experimental: a collection of microstories written as tweets ('Litmash'),  the story of someone calling random numbers and trying to impose a structure on the results ('Dial Tone'), a tale ('Algebra') told in 26 sections, one for each letter of the alphabet.

Not all the stories have elements of the fantastic or the SFnal: many are naturalistic, at least on the surface: in 'Parking' a parking attendant burns with desire for one of the women who regularly leaves her car in his area. Or is he a threatening stalker? In 'Slipping' a mysterious figure adopts multiple identities online - but why? Perhaps there's a sense that Beukes herself is, here, slipping: all those journalistic assignments, all those different themes - trans-human athletes competing in a kind of reality TV show, a fairytale in which a princess finds happiness somewhere she had never looked, stories of edgy art creators and architecture students who meet ghosts - seem to be her sampling possibilities, trying on ideas, and reporting back.

Sometimes, as I've said, things coalesce in themes or ideas that relate to the novels - both in the fiction and the non-fiction, where there is a discussion of the themes behind The Shining Girls, specifically the man who hates women so much that he wants to snuff out something special that he sees in them.

That idea - the twistedness behind the way things are - is a common motif, many of the stories touching on themes of, especially, race (how could they not) but generally obliquely. There's the determined woman who makes her living selling 'smileys' (cooked sheeps' heads) who has a spot of bother with a veteran of the Struggle. There are references (again in both the fiction and non-fiction) to the different districts, often close beside each other, the vastly different yet intertwined lives. Safe and dangerous places. But it's more I think about atmosphere and influence than straight reporting - a chilling account of a surveillance state run in the name of law and order, or that torture prison for 'aliens' (they're 'not human' so can they be dehumanised?) So many themes, so many ideas - reading this book is like turning a Kaleidoscope round and round.

An engaging collection, whether or not you're read the novels, and I hope hinting at still more strangeness to come soon from this most compelling writer.
Email ThisBlogThis!Share to TwitterShare to FacebookShare to Pinterest
Labels: 2016, Fantasy, Lauren Beukes, review, SF, Short stories, South Africa