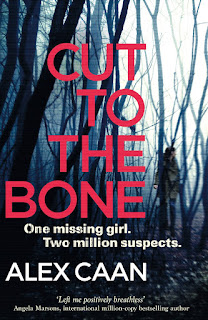 I'm pleased today to welcome Alex Caan, author of Cut to the Bone, with a guest post.

Cut to the Bone, published on 3 November by Bonnier Zaffre, has been compared to THE FALL, Sarah Hilary and MJ Arlidge. It is a slick, dark modern thriller that deals with contemporary issues of privacy vs internet stardom - the paranoid world of tech and cyber-security.

Ruby is a vlogger, a rising star of YouTube and a heroine to millions of teenage girls. And she's missing. She's an adult - nothing to worry about, surely? Until the video's uploaded. Ruby, in the dirt and pleading for her life.

So... about characters then.  Do they “take over” (some authors says yes to this, some quite strongly insist they (the author) remain in control)? Over to Alex for his thoughts...

‘The character just took over…’ Erm ok. I often wonder about this process, does the writer become possessed by some creative force or spirit, that drives them on to channel a fictional entity, making them write things they never would? I sit there sometimes writing, and want this to happen. It would make my life easier and my procrastination/worrying would be pretty minimal. (I am writing ‘that’ difficult second novel atm so…) They don’t though. I need to tell them what to do and say.

When writing Zain for example, his Turkish heritage (my love of Istanbul), his passion for Puccini (my own) are mine. His fitness levels (Krav Maga anyone?) are what I’d love to do. So I’m giving him my own interests- but still he’s not me. When writing a scene featuring Zain I channel something. Not him exactly, but it’s a mindset. The front part of my brain feels loaded in a different way, and my senses seem to be extensions of his. So as I write, the words I use, the language, the patterns and ultimately the actions, are his. Or what I associate with him. Zain is a tortured soul, hot headed because he is so broken, secretive because his trust in everything is breaking, and pushed into a place where right and wrong often don’t figure in his version of what feels good. He’s essentially my version of an Ottoman vampire, only dressed up as a former Spook turned cop. And his life is going to get a lot darker and bleaker as the series progresses. Only, why would I set out to do that to someone? Especially one of my leads? So is he writing himself, is he demanding I be true to him, and write him the way he should be written? Then how does this equate with my notion that my characters are often idealised versions of myself? What I want to say or do?

The same happens with Kate. She is extremely intelligent, measured, but also has a reckless streak in her which she justifies in her own world view. Is this me? I think I do the same, especially when I don’t conform. Well hey I can write my own rules right? But the rest? When writing her parts she again was there, in that front part of the brain, and I was thinking and viewing the world in a way that was strange. How can that be? How could I possibly look at a situation and respond to it in a way that I never would? Is this a supernatural thing? Or am I simply a conduit and writing things I have picked up over a lifetime of experience? Everyone I’ve met, everything I’ve read and watched? All of it outpouring onto my pages? This seems more likely an explanation when writing. What am I giving Kate of myself? My love of New England, American law enforcement, the FBI and The X Files? A moral core I admire in others, wish I had, or have somewhere but never get to use? I crave justice, for myself and others, and Kate does that.

And then there’s the villains. How do you get into the head of the worst of people? People who think it’s ok to cross lines without any thought of others? Hannibal Lecter in Thomas Harris’ novels is a classic example. Alex Thorne in Angela Marson’s Kim Stone series is another. And I am itching to write a villain like that, really get under their skin. But can I risk having them in my brain? Will I be the same again? I’m not sure, but I’m willing to try. Because if there were no rules, and I was so inclined, how would I work?

Then again, both Kate and Zain have their own shades of grey, Zain in particular has A LOT of this. So possibly I’m unleashing my darkness through Zain, and using Kate as a balance?

So I think I’m confusing myself. I don’t believe that characters takeover. And yet I believe something happens when I write my own. Maybe characters are simply keys, they unlock in us our experiences, freeing them from the rooms and cells we keep them in? Things we don’t even know we have experienced in some form, but with the write character, the lock is broken and you find yourself bursting onto the page in ways that shock even your own sensibilities.

Whatever the truth, what I can say is that writing characters is the most fun I’ve ever had.

Cut to the Bone is out now, available from the usual places - your local bookshop, here, here or here