Over the past few days I've reviewed the three books in Salla Simukka's Snow White trilogy - As Red as Blood, As White as Snow and As Black as Ebony.

Overall, in my view, they build into an assured and compulsively entertaining story with a fascinating and complex central character, Lumikki Andersson.

I'm very honoured now to be able to welcome the author herself to Blue Book balloon to answer a few questions about herself and her books.

Q. Thank you for agreeing to answer some questions for the blog. To start with one you probably always get asked - Did you always want to be an author?

A. I was about nine years old when I decided that I want to be a writer. I had always enjoyed books and reading and also telling stories of my own. So it has been my dream since childhood.

Q. How did you get started writing?

A I went to a hobby group of young writers when I was 13 and also studied creative writing at my school when I was 16-18. I wrote the first version of my first published book at the age of 18 and sent it to a competition for YA novels. I didn't win but the publisher thought that my novel was promising and after three years and a lot of rewriting and editing my first book saw the daylight when I was 21.

Q. So what is life like as an international author?

A. You know, it's a bit weird. Here I am, living in Finland, living my normal life, doing my normal things, writing my novels  and at the same time my books travel all around the world making new friends! Of course I also get to travel quite a bit and answer interviews in different languages, but somehow I still feel that my books have a "bigger" life than I do. And I like that. That's how it should be, because I love my little, ordinary life and wouldn't change it for anything.

Q. Where did Lumikki Anderson come from?

A. Actually the interesting thing is that I feel like I didn't "shape" Lumikki that much. She just came to me as a whole person. As I would have met her on the street and instantly knew who she was and what she has gone through. Lumikki is in many ways very different from the girl I was when I was seventeen. I was very social, had a lot of close friends, my family relationships were warm. I was much safer and happier than Lumikki but also more shy to speak up for myself.

But of course there are things that me and Lumikki have in common. We both enjoy our solitude from time to time and I can relate to all the feelings she is going through, even if I don't (luckily) have the same experiences. And I always think that it is best if the reader doesn't know too much about the similarities between the authors and the characters...

A The very first thing about the books were the titles (As Red as Blood, As White as Snow and As Black as Ebony). After that I had a few images in my head: blood on snow, blood-stained money, a dark forest... But I still didn't have the actual plot to connect all these images. I think that when Lumikki came, the plot also started to develop.

Q. How much control do you have over the characters? Did the books ever take completely unexpected turns?

A. When I started writing the first novel of the trilogy, I had some clear thoughts about the second and the third one. So in a way I had control. But of course writing a book always surprises the writer. It can be the characters or the plot or the structure or the language that take you by surprise. For example I didn't think that Blaze would play such a big part of As White as Snow. But these things happen. You just have to go with the flow and see where the book takes you.

Q. I think teenage me would have jumped at the chance to live in my own flat away from the parents while attending high school. That's unlikely in the UK though - it is something that might reasonably happen in Finland?

A. The high school described in the books is a real school in Tampere that I also went to. Because it's a special kind of art school (and there are not that many of those in Finland), about 30% of the students come from other cities. Many of them have no other choice than to live by themselves because their hometown is too far away. So yes, it really happens in Finland.

Q. What other writing has inspired you?

A When I was writing The Snow White Trilogy, I was inspired by fairy tales. Not just Snow White but fairy tales in general, the structure, the atmosphere, the underlying psychology of old stories. Many fairy tales are actually the YA literature of their time. They tell stories about growing up, finding your path, about love and sorrow and death. When it comes to the thriller elements of the books, I confess happily that I had the Norwegian Jo Nesbo in my mind. I enjoy his way of writing
very thrilling scenes.

Q. What's next - will there be more about Lumikki, or something else?

A. It's going to be something completely different. It's a middle-grade fantasy novel called Sisterland and it's about everlasting winter and everlasting friendship.

Here is a little more info:

Q: Finally, a question that isn't about the book. You're trapped on a lonely island and the rescue party will take several days to reach you. You have plenty of food, and you can have one book with you. Which would it be?

A. That's a tough one! Well, let's say collected works of Shakespeare, so that I wouldn't run out of reading too soon...

I'm very grateful to Salla for answering these questions - just a reminder that the books are on sale now from the usual places (see links in reviews!) and to look out for Sisterland when it appears. 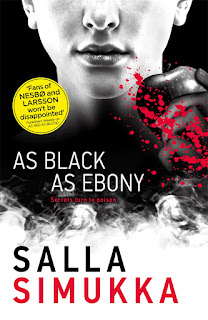 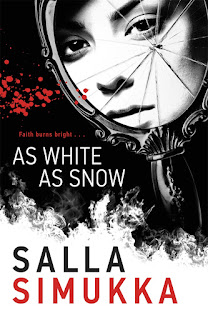