Today I'm joining the blogtour for Sacrifice, the new book by Hanna Winter (I'll be reviewing in a few days).

In her very first case, criminal psychologist Lena Peters is confronted with a killer on a murderous vendetta. And though she is unaware, Lena will play a prominent role in his deadly mission. Lena knows what makes killers tick and all about obsession, for she has been close to the edge herself. But soon she will become the hunted…

Hanna has kindly written a little about that tricky subject, the boundary between author and characters...

One thing an author will always be asked, is how much of him or her is reflected in their characters, how much of your book is actually “you”.

When someone asked me that question just after I had started to write Sacrifice, my answer was: not much. I really didn’t think I had anything at all in common with either the young profiler Lena Peters or her partner Wulf Belling. Curiously enough, I was soon told the exact opposite, as my editor, my biggest – and most cherished – critic let me know in almost every chapter (usually with a small comment or a smiley face in the margin of my manuscript), that Lena Peters in particular had “adopted” my tone and my attitude, and that we shared far more similarities than I had realized.

What those are exactly, I’d rather keep to myself. But I will say that, just as when Lena moves from a small town into the capital, I too had to first assert myself in a new and different environment when I left my home in Frankfurt and moved to Berlin – even if Frankfurt can’t really be considered “small”.

And I guess I also had always wanted someone like Wulf Belling in my own life, Wulf, who, despite his darker side, grows into something almost like a big brother for Lena during the course of the book. Their characters couldn’t be more different, but they complement each other well, and, initial trust issues notwithstanding, grow into an unbeatable team by the book’s end, able and willing to blindly rely on each other.

Writing Lena’s character was particularly intriguing for me. I was dealing with a very special kind of protagonist, a highly intelligent profiler on the rise, with intricate knowledge of the “subject matter”, her psychological understanding of the pathology of a sociopath allowing her to dive into the killer’s psyche far deeper than usual and skillfully confront even the darkest corners of the human mind. As to the story of “Sacrifice” itself, those same dark corners, the abysses of the human soul, had always fascinated me, and, just like Lena, I decided to dive into the shadows and see what I might find.
_______________________________

Sacrifice is out now as an e-book from Manilla, Bonnier's new imprint for translated fiction,and will be appearing as a paperback on 17 November. The next stop on the tour is tomorrow at the Northern Crime blog. 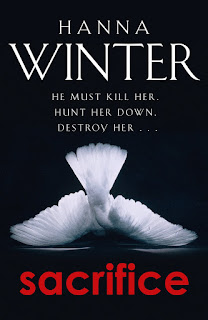 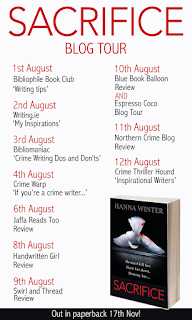