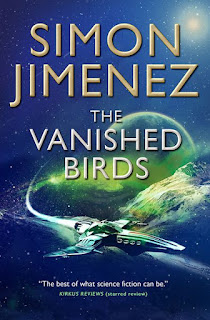 The Vanished Birds
Simon Jimenez
Titan Books, 16 June 2020 (e), 6 August 2020 (PB)
Read as: PB advance review copy, 416pp
ISBN: 9781789093926
Snap Verdict: Kept me up reading past midnight...
I'm grateful to Titan Books for an advance copy of this book to consider for review.
Well. The Vanished Birds is really something else, a SF story abiding in that sense of wonder which is the heart of the genre. It's a difficult book, though, to describe, in part because reducing it to a plot summary simply doesn't do it justice, so it's then hard to have a discussion about what's in it.
I could say that it's about the attempt of a space freighter captain, Nia Imani, to care for a stray boy who's brought to her ship after turning up on a remote planet; that it's about a legendary engineer trying to sidestep the all-powerful Umbrai corporation, rulers of the spacelanes, to find humankind's next evolutionary step; that it's a far-future SF story grounded in the climate chaos of the near-future; that it's about love, loss and guilt.
All of this would be true, but it wouldn't really convey what the book is like.
So I'll start by saying that The Vanished Birds is above all, perhaps, cinematic in the way it leaps from the small to the huge, from the now to the deep past. The first third of the book, especially, zooms in and out. We are first introduced to the "resource world" Umbrai-V (old name, Kaeda: we will learn more about this process of making planets into "resource worlds"). On Umbai-V, farmers spend their lives harvesting seed-pods, to be collected every fifteen years by a fleet of off-world ships (with no recompense, as far as I could see). It's very detailed, very particular, following the life of one man, named Kaeda after the world. You see, the fifteen years between arrivals of the freighters is merely several months for the ships' crew, so Kaeda's fleeting contact with the outside works, which sees him age from a young boy to a hale young man to an older, wiser man, and then to decay, is simply a few years' work in a lifetime for the crew, but an entire lifetime for him.
We see the arrival of the mysterious boy, the departure of the fleet and its return to Pelican Station, where people are preparing for a festival in honour of Fumiko Nakajimi. Then we reel back to Fumiko's early life in the 22nd century, the most recognisable part of the book, a world of social media, environmental activism and predatory capitalism. Fumiko's character flaws, revealed here, the choices she makes, will cascade forward a thousand years into the future and affect events then.
After this scene setting, the story proper begins, following Nia's voyage and the eventual fate of that boy. That's a tenderly portrayed and deeply moving portrayal of a woman who has made her living as a shrewd and tough captain, finding something else in her life and struggling to come to terms with it. It's the story of a young man who doesn't know who he is or the terror he has come from, learning with delight about this strange universe and being prepared for the choices he, too, will have to make. I won't say anything about those choices because they will come at the right time and we don't wasn't to rush towards them. There is a happy time in the middle of this book where a family of sorts forms, where there is exploration - of the universe and of ourselves - and lots of learning.
Of course that can't last, and as things fall apart, the book becomes very, very dark. I was raging at one character, aghast at some of what happens here and so, so sad at what becomes of the little family. In the course of the book Jimenez has created such vivid, real and human characters - with their own desires, fears and trauma - and I felt for them, for the imperfections of their lives, the little betrayals, compromises and wriggles. Yet there's a greater theme here, too: the way the Umbrai corporation, post-Earth, lords it over humanity. We are given to understand that, with Earth facing ruin, the corp has taken billions off planet, destined for the stars. But of course it's only taken those who can pay, or who seem useful: the ruinous social and economic system that has doomed Earth has metastasised into the Galaxy, hence those resource worlds and contracts which bind people beyond the grave.
At this time, and in this place, nobody seems to be opposing Umbrai - a resistance is growing, but it will demand a price...
A totally immersive, beguiling and tear-jerking saga, genuinely new and different. Strongly recommended.
For more information about the book, see the publisher's website here.
Email ThisBlogThis!Share to TwitterShare to FacebookShare to Pinterest