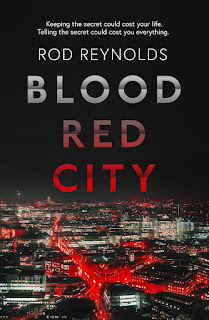 I'm grateful to Orenda Books and to Anne Cater for inviting me to take part in the blog tour and providing me an advance copy of Blood Red City to review.

Blood Red City is an intense, adrenaline-pumping thriller set in London one hot summer. It's a London both achingly familiar - the sweaty Tubes, the amiable, heaving late evening crowds on the South Bank, the cab offices - and, in our current pandemiced world, utterly foreign (those crowds!)

In this close, yet far-off place, we meet Lydia, a thirtysomething journalist whose career has beached on the celebrity desk, and Michael, who also deals in "information", carefully turning a blind eye to just what that "information" might be used for. Lydia doesn't have a drink problem but is in circumstances ('Two drinks making Lydia philosophical') where perhaps one has to look carefully to conclude she doesn't have a drink problem. She is going nowhere professionally, feels guilt over the support she's had from parents, and wavers on the edge of money troubles in a tiny cheerless flat with a flatmate she seldom meets, as they work different shifts. Michael has his demons, which he's adept at ignoring or dodging.

On the evening of those two drinks, "Lyds" receives a video by email, a video which shows a murder on the Tube. It may be a big break for her, and for the ex-collegue who's sent it, a way back into the game. But as she investigates, bunking off her night shifts writing bilge about celebs, it becomes clear that it could also lead to darker places.

Michael already has one foot in that darkness and for him the video means something else - an unknown factor in his carefully managed, amoral world. A factor that could mean danger, that he's not in control, has missed something. He needs to shut it down.

The two investigate, their paths crossing, both of them tripping wires and raising red flags in London's murky cash-rich strata of corrupt bankers, lawyers and politicians. Meanwhile Michael has an ailing mother, beloved sister and hated father to handle: Lydia has her boss/ lover and a lot of loose ends.

It all makes for a winning noir formula, at heart very simple - a woman, a man, and a murder - yet also bafflingly complex as the pair run down dead ends, miss the significance of clues, work contacts and sail close to the law. The degree of tradecraft - journalistic and detective - is simply joyous, Lydia and Michael employing the best of their skills to coax secrets from London's seamier residents for all the world as if they were squeezing juice from rotten fruit.

And there is rot here. Dirty money, favours traded, rules bent or dodged, investigations stymied. An ex Mayor on the make. Oligarchs and those who eagerly serve them. Layer upon layer of fronts, cut-outs and shell companies. It has a ghastly feeling of reality, as though Reynolds has pulled back the curtain on an amoral world we all suspect is hidden just out of sight.

And yet there is some morality here. As in the best of classic noir there are lines not to be crossed, attempts to walk those streets without becoming mean, grubby compromises, and regrets. But where everything is so dirty, who can keep clean? With money to be made, who won't, in the end, join the game? As I read this book my speculation about who would bend and who would break was as intense as my efforts to work out what was going on and why. In the end, it was the former - and those glorious, well-drawn characters of Lydia and Michael - that was the most compelling. Here are protagonists you will really care about, even if they can behave shabbily. Reynolds has given us a glorious, compelling story, a fast-moving, heart-in-the-mouth chase set against the magnificent background of London in all its pomp, all its grime and shabbiness.

This book is a winner. My advice - get it, before it comes looking for you...

For more information about the book, see the Orenda website here.

There are many more stops on the tour - see the poster below and collect them all!

You can buy Blood Red City from many places. Your local independent bookshop may, even in current circumstances, be able to get it for you. You can buy online from Hive Books, which supports local bookshops. You can also order from Blackwell's, Foyles, Waterstones or Amazon. 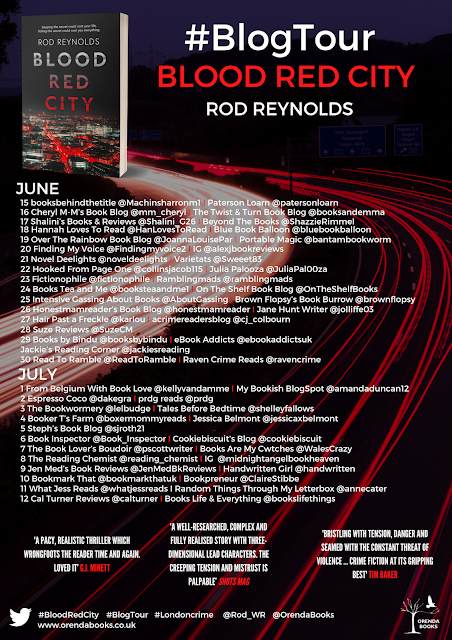