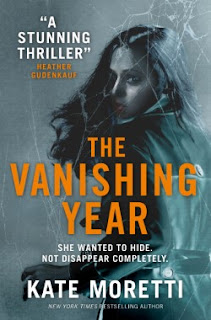 I'm really pleased to feature an extract from Kate Moretti's new book The Vanishing Year - a thriller with pace, intelligent, rounded characters and above all, heart.

You can read my review here. Now, over to Zoe...

Lately, I’ve been dreaming about my mother. Not Evelyn, the only mother I’ve ever known, the woman who raised me and loved me and taught me to swim in the fresh water of Lake Chabot, bake a sticky sweet pecan pie, fly-fish. I’ve thought about Evelyn plenty in the five years since she died—I’d venture to say every day.

My dreams lately are filled with the mother I’ve never met. I imagine her at sixteen years, leaving me in the care of the neonatal nurses. Did she kiss my forehead? Study her baby’s small wrinkled fingers? Or did she just scurry out, as fast as she could, hugging the wall, ducking the shadows to avoid detection until she burst through the doors, into the night air, where she could breathe again?

I could have been born in a bathroom stall at the junior prom or in the back of her parents’ car. I prefer to imagine her as a scared young kid. The only thing I know about her at all is her name: Carolyn Seever, and that is likely a fake.

My dreams are disjointed, filled with bright colors and blinking lights. Sometimes Carolyn is saving me from a faceless killer and sometimes she is the faceless killer, chasing me with knives up winding staircases that never seem to end.

Even when I’m awake, chopping vegetables for a salad for lunch or taking notes for a board meeting, I’ll drift off, lost in a daydream about what she might be doing right now or if we have the same dark, fickle hair or the same handwriting. Wonder what quirks, biologically, I’ve inherited from someone I’ve never met, and sometimes, I’ll come to in the middle of the kitchen wielding a large butcher knife, the lettuce limping on the counter. I’ve killed quite a bit of time this way.

I wonder if she’d be proud of the woman I’ve become.

The benefit for CARE, Children’s Association for Relief and Education, starts in an hour. I pace back and forth in the bedroom. I’ve never chaired before and I can’t afford to be distracted, yet here I am, my brain run amok when I can least afford it.

“Relax, Zoe, you’ve done a fabulous job, I’m sure. Like always.” Henry approaches me from behind. His large hands dance over my clavicle as he fastens the clasp of a single strand of freshwater pearls around my neck. I close my eyes and relax back into his lean frame, all sinewy muscle despite his forty years. He kisses my bare right shoulder and runs a hand down my side. His palm is hot against the fitted silk of my gown and I turn to kiss him. I step back and admire his tuxedo. His slick, blond hair and angular jaw give him an air of power, or maybe it’s just the way he appraises people, even me. He is studying me, his head cocked to the side.

“I think the single diamond would look stunning with that dress,” he suggests softly, and I pause. He crosses the bedroom and opens the safe, retrieving one of many velvet cases and I watch him deftly remove a thin, sparkling chain, return the box to the safe, and give the dial a clockwise spin. I love the curve of his neck as he examines the necklace, the small dip behind his ear and the slope of his hairline, his hair curled slightly at the nape, and I want to run my nails up the back of his scalp. I love the long lines of his body and I

imagine his spine beneath the layers of thick fabric, all hard-edged dips and valleys. I love his almost invisible smirk, teasing me, as he motions me to spin around. I comply and in one swift motion he removes the pearls and clasps the solitaire. I turn and gaze into the mirror and a small part of me agrees: the solitaire looks fantastic. It is large, five carats, and it rests above the wide band of the strapless dress, the bottom of the teardrop hinting seductively at an ample swell of cleavage. As always, I am divided with Henry. I love his authority, the strength he has that his opinions are not merely suggestions. Or maybe it’s just that he’s so different from me: decisive, definitive.

But I did love the pearls.

“Seems indecent somehow for a benefit, doesn’t it?” I am tracing the outline of the diamond, watching him in the mirror. His eyes flicker over my reflected body. “The size of the diamond,” I clarify.

He shakes his head slowly. “I don’t think so. It’s a benefit for children, yes, but only the wealthy attend these sorts of things. You know this. It’s as much a display of the organizer as anything else. Everyone will be watching you.” He rests his hands on my shoulders.

“Stop! You’re making me nervous.” I am already on edge, my mind swimming with details. I’ve done a few of these kinds of events as a second chair but never as a chairperson. There will be a large crowd, all eyes on me, and my heart flutters against my rib cage at the thought.

I’ve been in Henry’s world more than a year now and the need to prove myself seems never-abating. This will be the first time I’ve taken any of the spotlight for myself. My debutante ball, if you will. And yet, I’m completely foolish. I’m risking everything for a slice of validation. These are things I can’t say to Henry, or to anyone.

His palms are cool and heavy. We stand this way for an indefinite amount of time, our eyes connected in the mirror. As usual, I can’t tell what he’s thinking. I have no idea if he is happy or pleased, or what he feels beyond anything he says. His eyes are veiled and closed, his mouth bowed down in a slight frown. He kisses my neck and I close my eyes.

“You are beautiful,” he whispers, and for a moment, his cheekbones soften, his eyes widen slightly, the tautness of his mouth, his chin, seems to loosen. His face opens up to me and I can read him. I wonder how many other women say this, that their husbands befuddle them? Most of the time, Henry is a closed book, his face a smooth plane, his bedroom face similar to his boardroom face, and I’m left to puzzle him out, to tease the meaning from carefully guarded responses. But right now, he looks at me expectantly.

“I was thinking about Carolyn.” I wince, knowing this isn’t the right time. I want to pull the words back. He gives me a small smile.

“We can talk later. Let’s just have a nice time, please?” He reaches into his pocket and pulls out his cell phone. He strides out of the room and my back is cold, missing the heat of him. My shoulders feel lighter, and when I glance back to the mirror, my mouth is open as if to call him back.

It’s not that he objects to my finding Carolyn necessarily, he’s just impatient with the recent obsession. He doesn’t think these things ever end well, and he is the kind of man who respects the current “state of affairs”—he may have used those words. He can’t understand the need. You have me, he says when I bring it up. You have us, our life, the way it is now. She rejected you.

I think he takes it personally.

We have been married nearly a year and have the rest of our lives to “complicate things.” I think about couples who giggle and share their pasts, their childhood memories and lost loves. Henry thinks all these conversations are unnecessary, trivial. He is the kind of person whose life travels a straight path, his head filled with to-do lists and goals. Meandering is for slackers and dreamers. And certainly, mulling over the what-has-been is a fruitless effort; you can’t change the past. I admitted once to having a journal in college, a place to keep scraps of poetry, quotes I’d picked up along the way, slices of life. Henry cocked his head, his eyebrows furrowed, the whole idea unfathomable.

And yet, here I am. This house. This man. This life. It’s mine, despite the insecurities that seem to follow me around like a stray cat. I stare at my reflection. A thin, pink scar zigzags horizontally across the top of my right wrist, as I touch the diamond at my throat, the setting big as a strawberry.

His sure footsteps beat against the teak floor of the apartment and his deep baritone echoes as he calls for the car. Time to leave.
Email ThisBlogThis!Share to TwitterShare to FacebookShare to Pinterest
Labels: blogtour, crime, extract, Kate Moretti, psychological, Thriller