MR Carey's chilling and absorbing horror-thriller-fantasy-SF (take your pick) is just out in paperback.

My review from earlier this years is here. I said then that the characters were frighteningly real (in the case of one, frightening is exactly the right word) and concluded that "The complexity of Jess's situation, her need for redemption - and where will she find that in Fellside? - the absolute reality of the characters and the fascination of the mystery that she very gradually unteases, kept me totally hooked and wanting more of this."

I think if you read the book you will, too and I hope that paperback publication brings it many new readers.

To celebrate the occasion, Mike has answered some questions I put to him about the book and his writing. And I've also got a giveaway! So let's get started.

Q. Mike, thank you for taking the time to answer these questions about Fellside. Starting with characters - How long was Jess Moulson in your mind and when/how did you “find” her?

There’s a sense in which I didn’t so much find her as sew her together out of pieces of people I already knew. But that’s a half-truth. Even when a character is based on one real person you take liberties. You re-invent and re-cast. And when she’s a composite of several people you end up even further away from where you started. 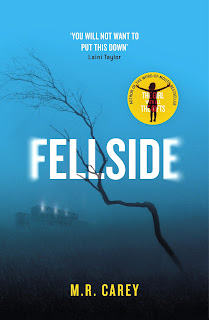 That being said, there are a lot of aspects of Jess that were inspired by people I’ve known and loved and been very close to. I’d wanted for a long time to write a story about addiction, and been put off by a sense of my own limitations. I was both too close to the source material and too far away. I’ve known addicts, and I’ve been an addict, but my own addictions were, to be frank, very small potatoes. I was writing Jess from a perspective that had a fair bit of parallax to it, and it took a while before I felt like I knew her.

It can work either way. In this case the core relationship between Jess and Alex – the addict, and the person she’s wronged and feels responsible for – came before everything else. That dialogue was the conceptual core of the story. Then I decided on the prison setting, and a lot of the plot dynamic came as a result of that decision. The remaining characters all in their different ways either reflect Jess or strike sparks off her, and of course everything is built around her quest and the big misdirect that ultimately deflects it.

I probably have a weakness for elaborate plot dynamics, and some of my earlier novels were over-complicated as a result. I was slow to absorb the lesson that every story stands or falls by its characters, and that if you make the characters bend into odd shapes to fit the needs of the plot your audience won’t forgive you or stay with the story.

Q: How much control do you have over the characters? Did the book ever take completely unexpected turns?

No, not really. Some characters – like Salazar and Shannon McBride – ended up having bigger roles than they were originally meant to, but that’s not a control thing. At least I don’t see it that way. I’m always a bit wary of writers who claim their characters rebel and go their own way. It feels like a humble brag, with a barely disguised subtext. “My imagination is so humonguously strong that my creations wrestle their way off the page and have actual lives!”

I think what really happens is less magical but equally cool. You have an idea of who a character is and how they fit into your story. But then when you come to write them and really spend time with them they fill out in your mind. They solidify, and they accrete nuance and purpose. These are just by-products of you actually having to write them and work them out: the placeholder version of the character gets replaced by a fuller and – if you’re lucky – more convincing version. And at that point you may decide they’re working so well you want to use them more.

The best example I can come up with is from my comic book writing. In The Unwritten there’s a minor character named Pauly Bruckner. He’s a contract killer who gets trapped in the world of a children’s story, where he is effectively transformed into Rabbit from Winnie-the-Pooh. In this form, as Mr Bun, he’s desperately unhappy and slowly going mad, because the world he’s in resists his every impulse and instinct. So he tries to rebel and just makes things worse for himself. That was meant to be a done-in-one story, but Mr Bun was so much fun to write and so interesting to explore that we ended up returning to him again and again, and eventually we gave him a fairly big part in the series climax.

I love it when that happens, but I don’t think it says anything about my abilities as a writer. It’s just very cool, very precious serendipity.

Q: Harriet Grace is a terrifyingly real character. Do you know where she came from?

When I write monsters I try very hard to write them from the inside and to make their monstrousness understandable. Hardly anyone in real life sees themselves as evil. They always know where they’re coming from and what factors fed into their decisions. They forgive themselves for most things, and even when something troubles their conscience they’ll usually see themselves as fundamentally decent in spite of that.

Grace was partially inspired by a story I read about a brother and sister who were trafficking young women into prostitution. I was really struck by how these two thoroughly messed-up and vile human beings stood by each other throughout the trial and sentencing. How in spite of their utter lack of empathy for pretty much everyone else in the world they felt love and concern for each other, to the point where they each claimed the greater share of the blame to try to exonerate the other. Somehow in the novel that translated into the story of Grace’s relationship with Stephen Menzies, and its disastrous consequences for both of them.

That doesn’t explain Grace, of course, and it’s not meant to. The detail of her facial cleft and the rejection she suffered as a child doesn’t explain her either, but it gives you a starting point for understanding her – how a sense of her own victimhood could translate into a determination never to be weak or at a disadvantage again, and how some really bad things could follow from that.

Q: The prison in Fellside was convincingly - scarily - real to me. What ‘on location’ research did you do?

I ended up doing quite a lot, but the permissions fed through the system slowly. By the time I got to do the majority of the actual prison visits the book was well underway. I went to Holloway twice, the first time to talk to the team doing the drug rehab work there – who were just amazing, really generous and helpful and full of insights – and the second time, after it closed, to visit the actual prison. I also went to two other prisons in the London area, where I did workshop sessions with groups of inmates.

But it’s fair to say that the bulk of the research was secondary. I read a lot of autobiographical writing by inmates and former inmates and a lot of articles about the modern prison system, which has changed out of all recognition in the last twenty years and is still changing. I tried to reflect those changes, and I tried to make Fellside as a setting as authentic as I could, but I took some liberties to make the story articulate as it needed to. One of the biggest inaccuracies, although it was a conscious decision, is about the size of the place. If Fellside really existed, and if it was as big as it’s stated to be in the book, there wouldn’t be another woman in jail anywhere else in the UK. Out of the entire prison estate of around 100,000 inmates, only 5000 are women.
Q: Did any writing particularly inspire Fellside?

I think Erwin James’ A Life Inside was the most influential secondary source. I decided not to read Piper Kerman’s My Year In a Women’s Prison because Orange Is the New Black was already happening and I didn’t want either to overlap with it too much or to push against it too strongly. It seemed safest not to know about it. I’ve seen the series since, though, and I think it’s amazing. I’m also reassured to find that it’s not like Fellside in any way that really matters.

Q: There is a point in the story where a thing happens - I'm not saying what it is - that seems to divide readers. Some say, that thing would never happen. How do you respond to that? (Do you respond at all?)

Do you mean in the appeal? Yeah, I freely admit that I was bending the logic of the judicial system to breaking point there. In reality it’s very hard to imagine the appeal court judges permitting the re-examination of a witness in open court like that, or allowing that re-examination to lead to a revision of the original verdict. That’s not how appeals work. But all the alternatives were a lot less dramatically satisfying. I just wanted to have that conversation happen in a forensic setting, so all the various clues could be put on the table and the truth finally produced with a big flourish.
And I have the excuse that what comes out in court is – by this point – not the truth we’re really looking for. It’s almost a grace note, although obviously it has huge significance for Jess. It felt like a pardonable sleight of hand.

In prose form, yes. But I’m working on the screenplay for a movie version. If it happens it will be produced by Poison Chef and directed by Colm McCarthy, the same team that did the movie version of The Girl With All the Gifts. That prospect makes me very happy indeed.

Q: Finally, a question that isn't directly the book. You're locked up in a privately run prison and you can can choose one book. Which would it be?

That would be a hard call to make. You’d need something that had a really meaty and satisfying style, so you could read isolated passages and still enjoy them. If it had to be just one book I’d probably go for Tristram Shandy. If I could cheat and have a series of novels, it would be either Gene Wolfe’s Torturer quartet or the Bas Lag novels of China Mieville – Perdido Street Station, The Scar and Iron Council.

Mike, thanks for those answers and I'll look forward to a Fellside film as well as the upcoming Girl with all the Gifts.

Fellside is out now from Orbit in hardback, paperback and e-book. You can buy it at your local bookshop, here, here or even here.

The Girl with all the Gifts movie is out on 23 September.

To celebrate, I have copies of both books to give away. To enter, go to my Twitter, @bluebookballoon, follow and retweet the pinned tweet. I'll pick a random winner for each book next Thursday (15 September). I'm afraid I can only post the books out in the UK and Ireland.