Review: The Vagrant by Peter Newman

‘The Vagrant is his name’ runs the strapline for this book. ‘He has no other.’ 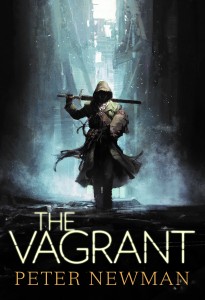 In fact, the titular character is never called ‘The Vagrant’ by anybody else and he doesn’t refer to himself as such, because he never speaks. But it describes him well. He is homeless, outcast, a scavenger. But as this is a fantasy novel, he is not merely wandering – there is a quest to pursue: he must deliver a renowned sword to its keepers. Eight years before, the demon horde rose from another reality and defeated the armies of the Winged Eye. The sword’s owner then fell to the demon leader, the Usurper, and the weapon is, apparently, a key to victory or defeat: both sides now covet it.

If you’re not a reader of fantasy, that may sound like an offputting summary of a stereotype fantasy novel. I hope that I can convince you otherwise, because

this isn’t an ‘ordinary’ fantasy novel. As he strides through the demon-infested wasteland, the Vagrant also has a baby to care for: to feed (he acquires a goat to supply milk), to clean, to entertain and (when she becomes ill) to find medicine for.  And there is more, much more. Those who do read fantasy will of course know already that it’s a varied and surprising genre and that the ‘ordinary’ version, while it exists, is paradoxically not representative and that you never really know what to expect – but this book makes that point in spades.
One can only admire both the Vagrant’s determination (how DO you get out of a tricky situation when you can’t draw your sword for fear of dropping Baby and you can’t talk your way out because you can’t talk?) and Newman’s confidence in his storytelling, especially given this is a first novel.  Both do, however, pay off as the book moves through a series of ever more perilous, ever more intricate adventures.  Luckily (…perhaps…) the wasteland isn’t completely empty. There are shattered towns, and shattered people.  Food, shelter and even medicine are available, at a price. But the people are desperate and even more of a threat than the demons. There are dark trades in human flesh. There is collaboration with the occupiers. Everywhere, the struggle for survival taints the spirit as the demon-stuff taints the body.

These demons aren’t just scaly monsters from the Abyss, they are formed from an essence, an undifferentiated, fluid contagion that flows through and transforms things, bringing mutations to humans and animals and sometimes congealing dead (or living) bodies to create a new being.  Such are the Uncivil, the Usurper, the Half-Alive, the Hammer and the feared Knights of Jade and Ash.  The descriptions of some of the fully demonic – dark souls cloaked in vestments made of reanimated, fused human bodies – are vivid and truly horrifying and the transformed humans no less disturbing.

It is a strength of the book that all the creatures that the Vagrant he meets –demon, corrupted human or wretched survivor – are fully rounded and, often sympathetic, even the ‘monsters’.  The Vagrant himself senses this. As he travels among these wretched folk, he seeks to retain his own humanity and can’t but try to help – defending a village here, freeing a group of prisoners there, paying for food he recovers from a band of marauders who stole it from him.  When he cannot help, and has to abandon to death a woman who aided him, he rages (and Newman is adroit at showing, not telling, you this, even without speech).  The tone and setting reminded me somewhat of a Western: the Man With No Name comes into town, standing up against the outlaws and improbably rallying the townsfolk – but always risks losing his way, becoming one of his enemies.

And like the best Westerns, the book doesn’t deal in black and white. There are no rescuers. When we eventually meet the remnants of the force the demons overcame, the Seraph Knights of the Winged Eye, they’re an aloof, arrogant and entitled lot, obsessed with ‘purity’ and expunging the demon taint, even if it means killing those who carry it. At one level, there isn’t much to choose between the demon army and the Winged Eye, indeed in some respects the demons themselves are more sympathetic, more capable of change and possibly redemption. Some offer (dubious) compromise and try to make a reality of the new mixed world created by their eruption from the Breach. In contrast, the Winged Eye shelter behind their force barrier, maintaining their purity and waiting for the magic sword that will save them (but rather scorning the ragged man who carries it).

While most of the action of the story takes place in the present there is a series of flashbacks, describing how the demons came into the world and who, and what, the Vagrant is. I generally don’t like too much flashback but these episodes are integrated well and there are not too many of them. My only (slight) criticism of the book would be that there is a slight jarring between these events purportedly having begun eight years before, and the descriptions of the wasteland and its people which seem to suggest a much longer period of decay and decline. But that’s to nitpick.  It’s a compelling and vivid world, peopled by well rounded and sometimes tragic characters (I’d defy anyone not to cry over the fate of one, in particular, of the Vagrant’s band).

Newman explores prejudice and redemption, the need for compassion set against the drive for survival, even the treatment of refugees (regarded by one side as at best useless mouths, by the other as a source of body parts and slaves). The choice to make his central character voiceless seems risky to begin with, but pays off brilliantly in this intelligent, readable and absorbing novel.
Email ThisBlogThis!Share to TwitterShare to FacebookShare to Pinterest
Labels: 2015, Fantasy, Peter Newman, review, Shiny New Books