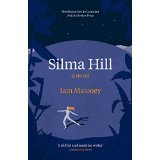 If you pressed me to sum this book up in a few words, I'd say "modern gothic". Or perhaps, to make it absolutely clear, modern Gothick. There is an air about it of one of those tales where monstrous, freak events abound, people are buffeted and baffled and heroes tested.

The story is set in mid 18th century Scotland, somewhere on the west coast. Abdale is a remote village on the banks of a sea loch, set under Silma Hill with its circle of ancient standing stones.

Though living in a backwater, Burnett has dreams of scientific glory, wishing to join the "Society" in the "capital" and contribute learned papers. (It's one of the marks of this book that while in one sense the setting is clear, in another, Abdale appears a bit placeless, or timeless, only loosely anchored in history: it's definitely an unusual place in religious terms with a - presumably ancient - cross at the centre of the village, and prayers for the departed).  His opportunity comes when old Sangster, digging for peat on Silma Hill, finds an ancient wooded statue: Burnett determines to study this - even after Sangster drops dead and villagers begin to mutter about idolatry.

For me one of the best aspects of the book was the slow burn, the way that events - and accusations - then slowly take hold, gossip spreads, old rivalries and grudges are engaged. Maloney doesn't make it completely clear what is really at the bottom of it all - like that giant armoured head in The Castle of Otranto, the reality may be too big to grasp. Rather it's the reaction that he focusses on, or, I might say the overreaction - while some pretty strange events do take place, I'm not sure there's anything that is actually threatening or harmful.  I was also absorbed by the character and contradictions of Burnett - preaching a loving God but beating his daughter; supposedly the voice of religion in his tiny parish while yearning for the scientific world of the "Society", rationalism and the enlightenment; forced by his office to lead the investigation of "witchcraft" which neither he (nor, apparently, any of the others involved) actually believes in.

While Burnett is not an admirable person his self-justifications are understandable and recognisably human, as are the no less ignoble reactions of the villagers at large. So we get denunciations, panic and a spiral of hatred. That part of the story seems more modern than anything (while this book is described as "historical", Maloney doesn't make it read as ye olde tyme speech, he's happy enough to throw in an "okay" or talk about "tuning in" to a conversation - making the whole thing more immediate, even if it might offend purists).

Overall, an enthralling and thought-provoking tale, especially once the story really gets moving. There were a couple of strands that I thought could have been given more detail - for example, the bad blood between Burnett and the local Sheriff, Dawkins, which isn't really explained although it is an important factor in what happens, and the shift in old Mrs Sangster from an almost bardic teller of ancient pagan tales to an accusing denouncer of witchcraft. However these are fairly minor points in the story overall.