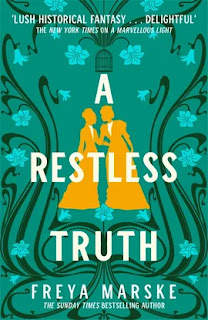 A Restless Truth
Freya Marske
Pan Macmillan, 10 November 2022
Available as: HB, 400pp, audio, e
Source: Advance e-copy
ISBN(HB): 9781529080933
I'm grateful to the publisher for an advance e-copy of A Restless Truth via NetGalley to consider for review.
Following on from A Marvellous Light and taking place in the same Edwardian magical timeline - one threatened by the dark truth of how that magic originated - A Restless Truth focuses on two young women, Maud Blyth and Violet Debenham, who have taken passage on an ocean liner from New York to England.
I love the idea of a Golden Age liner-set mystery. The little enclosed world. Strangers pushed together and having to get on (or not). A liminal space, neither one place nor the other. The different classes, demarcated but still cheek-by-jowl. People feeling free to be... a little free. The setup simply breathes intrigue, and A Restless Truth takes full advantage, it could indeed be a magical version of, say, Anything Goes! with the same Wodehousian complexity as the mess the two women are involved in becomes ever deeper and harder to untangle.
Where A Restless Truth departs from that model, of course, is in its frankly sensual aspect. I almost wrote 'subplot' but that's not right - this part of the story is not something that happen to Maud and Violet's it's about who they are (even if one of them enters the story innocent of that and is subject to an awakening). It is also as key to their motivations as are their magical interests and family backgrounds. They are attracted from the start and it's more a matter of when, not if, they will consumate that. Readers of A Marvellous Light will not be surprised by what follows. As in the previous book, Marske writes scenes between her lovers that are passionate, explicit and life-affirming. But to borrow that phrase again - Anything goes!
Readers of A Marvellous Light will also be pleased - as I was - to meet Lord Hawthorn again. We were introduced to Hawthorn in the earlier book where he wasn't particularly helpful to our heroes. Here, he's more obliging, either because Maud and Violet are more persuasive, or perhaps because on a liner he just can't escape them for long. Either way, Hawthorn is captivating. We do learn a little about him yet there is still a mystery that isn't resolved here - I want to know more! (Based on what we are told, I feel I ought to call him "Bad Lord Hawthorn" because he's the type that innocent young girls seek out when they have decided - like Violet - that it's time they were ruined. (He's happy to oblige)). Whether there is a redeeming streak to him (but do we want that?) or whether he just wants a quiet life, unpestered by interfering minxes, remains to be seen.
What else? A pack of villains, obviously, some cooly dangerous and others bumbling. Murder. Jewel thieves. A radical vendor of smutty stories. A lot of social class barriers that Marske spends the novel disassembling, examining, reconstructing and generally subverting. Maud and Violet are shining examples of this disobliging attitude to convention (whatever is becoming of the young these days?) but there's more to them than that. In this short, hectic passage aboard ship, surrounded by peril and exploring aspects of themselves that Maud had never even dreamed of (well, maybe she'd dreamed...) there is still time and space for a most complicated relationship to build up between the two, one driven by social position, their previous histories, their fears and longings (really, really not simple!), not a little prejudice, and of course, Secrets.
It's all, frankly, captivating. I adored A Restless Truth, perhaps even more than its predecessor, if that's possible. Simple joy from the first page to the last with great characters, a ludicrous but involving plot and a great deal of action (of several types).
Very strongly recommended, but more importantly, great fun.
For more information about A Restless Truth, see the publisher's website here.
Email ThisBlogThis!Share to TwitterShare to FacebookShare to Pinterest
Labels: 2022, Edwardian, Fantasy, liner, magic, Queer