Blogtour - The Finnish Invasion: The Mine by Antii Tuomainen 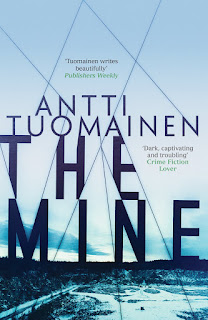 I'm back on the awesome Orenda Books Finnish Invasion blogtour with Antii Tuomainen's The Mine.

Only the most significant moments in life can be this mundane. Life doesn't come crashing down around us when a champagne bottle is popped open. Life creaks at the seams and the sun and the stars shine in the sky as you sit down on a bus, unsuspecting, and stare through the sleet at the landscape beyond the window, or as you wash the dishes, your back aching. The phone rings, your hear stops. It's at moments like this that a partner, whom you've trusted for years, tells you over supper they are leaving, that they've found slmeone else and will be moving out the next day.

I found it a strange book, deeply atmospheric and imbued with a sense of brooding cold whether in the northern region of Finland where the titular mine is sited or in the more extensive sections that take place in Helsinki. That atmosphere almost amounts, I think, to a moral coldness whether in the personal life of journalist Janne Vuori, in the business dealings of Finn Mining Ltd or in the series of clinically staged murders carried out by a hitman, each more inventive and shocking than the last.

There's a feeling that anything might happen, that all bets are off - a distinctly noirish sensibility, rather than that of a straight crime novel. And indeed, there is no crime as such, no murder, to motivate the story, not for some time. Rather we have mean (if pretty, snow covered) streets, attempts at a cover-up and - within the pages of the book - a somewhat anguished debate about the environmental ethics of mining.

Janne has received a tipoff that something's up with the Suomalahti nickel mine and sets off, in dead of winter, to investigate. That doesn't go unnoticed and he soon begins to think he's being followed. At the same time, that hitman appears on the scene and people begin to die.

Interlaced with this is the story of Janne's family: his father left when he was only one year old, but Janne's mother doesn't seem to feel particularly bitter about being abandoned and eventually he had to stop thinking about it. Scars remain though and history seems to be repeating itself, with Janne and his wife Pauliina increasingly at odds as he immerses himself in work, neglecting their daughter. The book is as much a study in the disintegration of this marriage as it is a crime novel,or a thriller. Janne isn't, perhaps, a particularly admirable character but he does have a dedication to uncovering the truth and by the end of the story I had warmed to him somewhat.

Tuimainen keeps the pace story up throughout, with Janne and his colleagues threatened in an attempt to get them to drop the case, and with that very disturbing and very professional series of murders taking place, as it were, in the corner of the eye, the killer brooding on life, death and the effect on him of his very violent trade. There is a theme, I think, of consequences: they may be dodged, they may be put off, but they catch up with you in the end - even if it takes 30 years.

Despite a superficially happy ending I couldn't really think that the prospects are bright for anyone at the end of this book. But at least some of them survive...

A chilling (in every sense of the words) and very different take on human motivations, reaping what you sow and trying to make the best of things. Also excellent lucid prose from translator David Hackston.

If you want to hear Antii in conversation with Kati Hiekkapelto, author of The Exiled, and Claire Armitstead you need to catch the recent Guardian books podcast which recently featured them in a fascinating discussion about Nordic Noir (take note - not, in this case, Scandi noir). 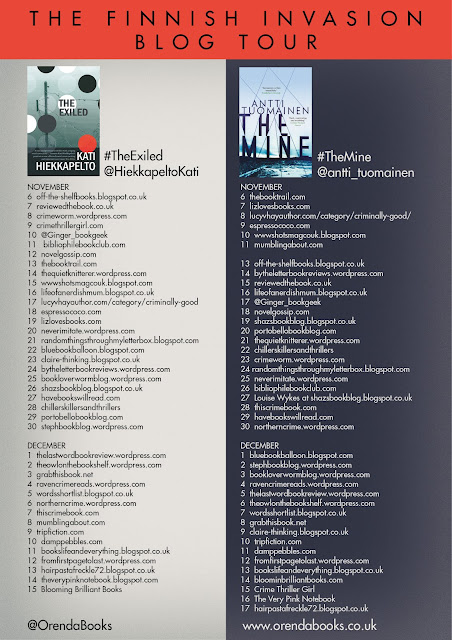 Email ThisBlogThis!Share to TwitterShare to FacebookShare to Pinterest
Labels: 2016, Antii Tuomainen, blogtour, Finland, The Mine